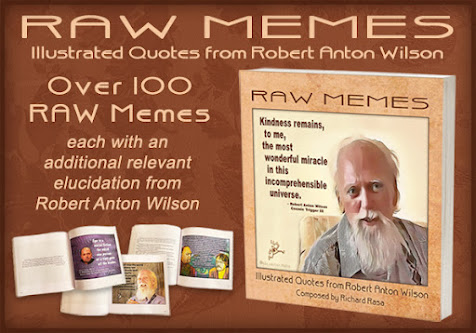 Hilaritas Press has announced the release of RAW Memes, a collection of memes by Richard Rasa built around Robert Anton Wilson quotes.

RAW came up with many memorable epigrams, and I've always enjoyed Rasa's memes and have often featured them here. I've put the book on my Christmas list.

Rasa says, "When Hilaritas Press was launched, I was rereading Bob’s books, and making note of my favorite quotes. To advertise our new editions, I started using those quotes in illustrated memes. At the time of writing this, Hilaritas Press has published 20 books. I’ve created a couple hundred memes for Hilaritas Press, the RAW Trust and Flying Lasagna Enterprises. The memes in this collection of RAW Memes are my favorites."

See the link for more.  The book is available from Amazon and the other usual places; you can buy it from Barnes and Noble, for example, if you want to help keep your local chain bookstore open.

I think this book is a wonderful and lovely idea!
Something nice to have on a table and to pick up anytime for a quick shot of cosmic schmuckiness.

What nice holiday news. It’ll most definitely be the new coffee table book.