Cats, home for the holidays! 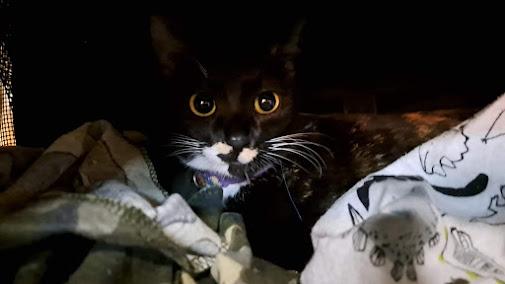 The above cat, Munchkin, recently relocated from East Timor to Virginia, on the East Coast of the U.S. He's been reunited with my friend Rob Pugh, a RAW fan, and Rob's wife. Apparently, twice a year, it is possible to transport a cat from East Timor to the U.S., so long as you are willing to pass through Portugal.

Rob's wife works for the State Department and was earlier this year stationed at the U.S. Embassy in East Timor. She was transferred back to Washington, D.C. She and Rob thought it would be easy to take their cat along, but it didn't work out that way, Rob reports:

"When we got to the airport in June, despite the many assurances from the airline, they refused to let our cat board with us... long story short, after months of logistical, bureaucratic and other obstacles, we just got back last night from a week and a half of 30+ hour flight times, from returning to Timor and hand carrying her out through Singapore, Dubai, Portugal... "

When I asked for more details about what happened to the cat when the couple tried to board with it back in East Timor, Rob added:

"After a few frustrating hours at the airport, the Mrs and I called it and decided we weren't getting on the plane, returned to our empty government housing and spent 3 weeks, to no avail, trying to figure out an exfil/extraction from Timor to the USA. Due to the requirements/vagaries of government regulations, after three weeks we had to call it and leave our cat  there while we tried to figure out a way to get her out of the country. Very luckily we had in the couple months prior frequented the only animal boarding, supply, feed store in *the entire country* and were able to board her there while we had to come back to the states. There are, literally, no - zero - none pet relocation services companies in the country (see again, developing country/third world) and we spent the last four months contacting multiple companies in Indonesia, Australia, Singapore, the USA to try and find some way to get her to the US. To no avail. There are limited flights out of Timor, and the countries they go through - Indonesia, Malaysia, Australia - all are heavily restricted wrt animals. But twice a year there are flights run through Portugal (former Portuguese colony) that served as our Plan B. After 4.5 months, Plan B was now Plan A, and once navigating more bureaucratic State Dept nonsense, we went back this month to hand carry her out. It was, tbh, just a nightmare. But it all worked out, and now our 'family' is reunited." 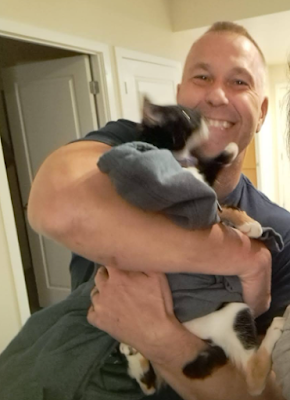 It seems to me Munchkin ought to be willing to hold still and pose for a photo after his owners went to all that trouble.

I can't top Rob's story, but by happenstance I was involved in a much more modest cat transportation effort over the weekend.

A volunteer transportation outfit called Imagine Home needed to move a newly-adopted cat from Michigan to New York, so a relay of volunteers moved the cat from point to point. My wife and I took possession of the cat in Elyria (west of Cleveland) and transported it to Mentor (east of Cleveland). 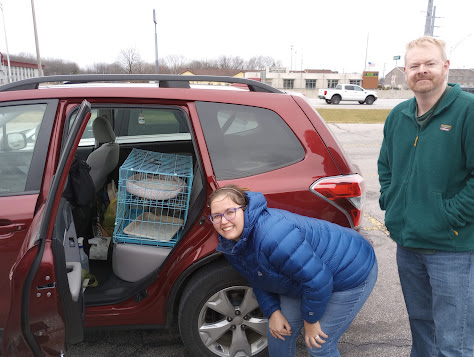 My wife and I took possession of a cat named Smoke from these folks. 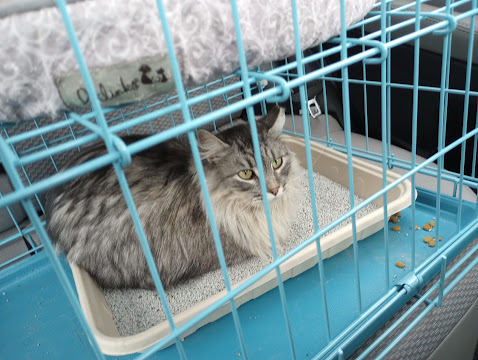 Smoke sitting in the back seat of my wife's car. 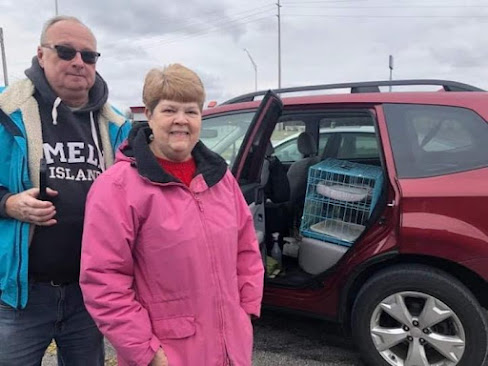 My wife and I in Elyria, Ohio, after we've taken possession of Smoke.