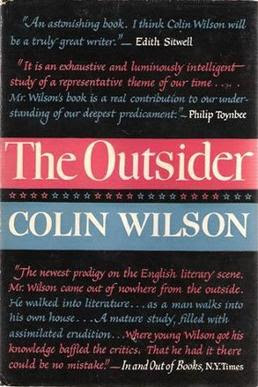 Another good find by Martin Wagner: Robert Anton Wilson interviews Colin Wilson for the April, 1985, "New Age Journal." Certainly they find some interesting topics to discuss and seem to agree on quite a bit.

Here is a question and answer I liked:

Robert Anton Wilson: How does all this connect to your interest in parapsychology?

Colin Wilson: Only accidentally. When I was first asked to write a book on the occult, I thought, “Christ, what a bore.” I have since written half a dozen books on the subject, but only because it is connected with the things that really interest me—brain functions, peak experiences, and so on. I agree with the yogis that in learning to discipline the mind one often activates certain paranormal powers, but they are trivial and should not be a matter of obsessive interest. Their only importance is that they show again that ordinary consciousness is not the limit of what our minds can do.

And here is Colin Wilson about his discovery that people can be healthy and happy:

My first real clue came from Abraham Maslow, after I published The Age of Defeat. He read it and wrote me a letter agreeing with me that writers should learn to stop being defeated, and he called my attention to his own research. When I read his works I was fascinated, because he was a psychologist who had gotten sick of studying sick people who talked about nothing but their sickness, and had started studying the healthy—something that had never been done before. He discovered that healthy people had with a fair degree of frequency what he called peak experiences, feelings of sheer happiness. They were not necessarily “mystical” experiences. One was described by a young wife watching her husband and children eating breakfast. Suddenly a beam of sunlight came through the window, and she thought, “My God, aren’t I lucky!” and went into the peak experience. Another was a young jazz drummer working his way through college who discovered one night he couldn’t do a thing wrong and went into the peak experience as he drummed. A hostess after a highly successful party, looking around the room at the cigarette butts trodden into the rug and the spilt wine, nonetheless suddenly had a peak experience. Reading these sorts of cases, I began to surmise that when you’ve had an intense peak experience it gives you an optimistic view of the universe, which is the opposite of the view of the criminal, who generally thinks the universe is a bloody awful place and the only thing to do to show your objection is to react violently.

Could this relate to Beethoven's statement, cited by RAW in "Beethoven As Information" in The Illuminati Papers? Beethoven allegedly said, "Anyone who understands my music will never be unhappy again."

The discussion of Colin Wilson aborting his suicide attempt reminded me of RAW on the Brooklyn Bridge, as discussed in Cosmic Trigger 2.

According to Gary Lachman’s bio Colin Wilson wound up way down deep in his own tunnel.