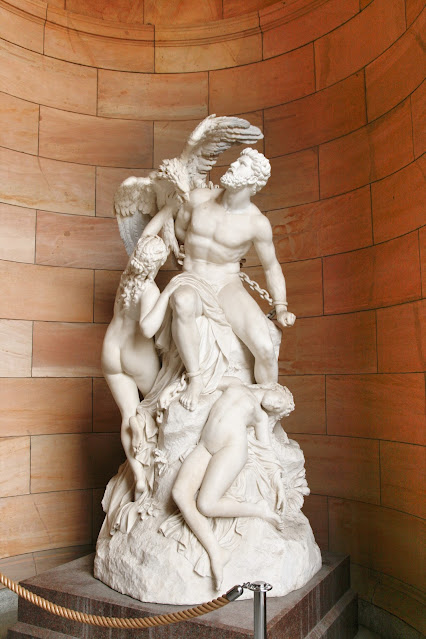 Prometheus and the Oceanides and eagle Ethon - Scuplture by Eduard Müller (1872/79) at Alte Nationalgalerie Berlin. Photo by Christian Paul Stobbe for Unsplash.

Prometheus Rising concludes with Chapter 19, a chapter without exercises in which Robert Anton Wilson discusses the implications for the future if people can advance along the eight circuits and increase their intelligence.

It's possible to nitpick at the inaccuracy of RAW's forecasts -- we didn't get a "Longevity Pill" and space migration by 2005 -- but I also thought the chapter was inspirational. Work is being done on space migration, intelligence increase and longevity.

A couple of chapter bits that caught my eye:

RAW writes, "Maurice Nicoll, physician, psychiatrist, student of Jung, Gurdjieff and Esoteric Christianity, wrote that 'the only purpose in work on consciousness is to decrease the amount of violence in the world.' This is Public Health Problem Number One in the nuclear age, the age of overkill."

I wish this statement was dated, but I recently read that with Russia's military failure in Ukraine, the risk of nuclear war rises as Putin becomes more desperate.

RAW also writes, "Most of the fifth-circuit adepts (aquarian conspirators) have learned Joyce's arts of 'silence, exile, cunning': they are invisible." I have been studying Epicureanism a lot  lately, and Epicurus advised his followers to "live unnoticed" so that they wouldn't be hassled over their unconventional views.

The Hilaritas edition of Prometheus Rising ends with an afterward by Rasa. As I wrote in an earlier article, it largely focuses on why RAW flipped the sixth and seventh circuits when he wrote elsewhere about the Eight Circuit model.

As a matter of housekeeping, this is the last Prometheus Rising online reading group post that Eric Wagner scheduled when he set the PR schedule back in August of 2020. Eric has told me, however, that he has one more post he wants to do, and I have one more in mind, and Apuleius can do one more posts, if he chooses. Still, we are almost done. I will announce a schedule soon for the Natural Law reading group I announced Friday.

"RAW writes, 'Maurice Nicoll, physician, psychiatrist, student of Jung, Gurdjieff and Esoteric Christianity, wrote that 'the only purpose in work on consciousness is to decrease the amount of violence in the world.' This is Public Health Problem Number One in the nuclear age, the age of overkill.'"

I agree about Public Health Problem Number One. My only quibble with Nicoll's comment - I would change the word "only" to "primary." I believe work on consciousness can reduce many kinds of suffering.

The nuclear weapon use rhetoric has amped up even since Tom posted this on Monday. It seems it could easily shift from rhetoric to reality. I don't see anyone trying to cool things down. What level of stupidity thinks anyone can win at war? Higher consciousness desires peace.

On this side of the pond we have a pathetic, failed demagogue actively fomenting violence in preparation for getting indicted for his criminal behavior. Work on consciousness has a long way to go on a mass scale.

Great point about living unnoticed. Along those lines, Burroughs writes putting on a cloak of invisibility when going out. I've applied this strategy for years when traveling. I would also call it part of Sufi training. Maybe that's why they're so hard to see? It also aligns with the four instructions of magic: to know, to dare, to will, to keep silent.

I posted my latest Deleuze video on the 18th Series. For some, likely technical reason new posts of it no longer appear in the Sangha blog roll. RAW was into Zen and this one has a Zen connection. Video and description here:
https://oz-mix.blogspot.com/2022/09/18th-series-of-3-images-of-philosophers.html