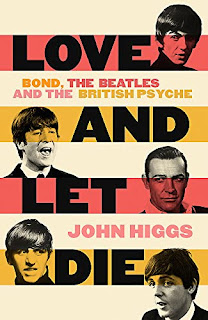 The new John Higgs book Love and Let Die (about the Beatles and James Bond)  is out (in Britain, we have to wait in the U.S.) and as past of the promotional effort, John has given an interview to the Beatles Book podcast.  Topics covered include how Paul McCartney's James Bond theme song affected Paul's post-Beatles career, how history will judge critics of Paul's career and which Beatle is the most like James Bond.

My favorite Beatle when I was a young teen was George, then I switched to John, but now Paul is my favorite. At some point, I realized that John's image as the intellectual among the Beatles was oversold -- it was Paul who was the most interested in avant-garde electronic music, for example.

Email ThisBlogThis!Share to TwitterShare to FacebookShare to Pinterest
Labels: John Higgs, The Beatles