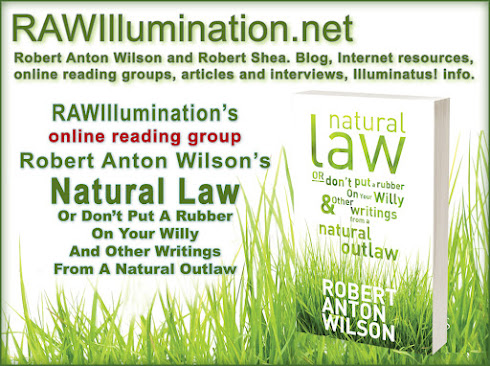 The long Prometheus Rising online reading group is winding down -- there will be only a couple more posts or so -- and I would like to announce plans for a new reading group.

Natural Law Or Don’t Put A Rubber On Your Willy And Other Writings From A Natural Outlaw, edited by Chad Nelson, was released in January by Hilaritas Press. Although it reprints a long essay which had long been out of print, it is essentially a new book, as more than half of it is new material that Chad assembled.

It is also, in my opinion, a really good book, and one that has not received the attention that it should, even from Robert Anton Wilson fans. I can't control the reception to the book by other people, but I would like to use this blog to invite everyone to read it. Hence, the new reading group. I am confident that RAW fans who choose to take part will find the exercise worthwhile.

As usual, the format for the reading group will be a main blog post, with everyone else invited to provide comments. I haven't set a schedule yet but I expect to launch in about two months, in November, to give everyone a chance to get a copy of the book. At this point, the book is available as a trade paperback and a Nook ebook. There is no Kindle yet, but Hilaritas is working on it.

For more information on the book, see my interview with Chad Nelson.  Thanks to Rasa for the promotional meme.

I have an idea for another reading group next year but I want to think about it before announcing it.

Email ThisBlogThis!Share to TwitterShare to FacebookShare to Pinterest
Labels: Chad Nelson, Natural Law Or Don’t Put A Rubber On Your Willy And Other Writings From A Natural Outlaw

Most excellent news, Tom Jackson, something nice to look forward to!