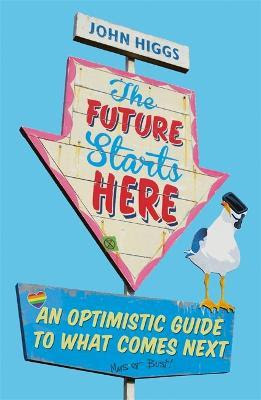 John Higgs is a wonderful writer and I am determined to read all of his books; I have read many of them. Lately, though, I've gotten a little behind. I've just finished The Future Starts Here: Adventures in the 21st Century. I had to get caught up: I want to read the book on William Blake, William Blake Vs. the World, and I am also eager to read the new one on James Bond and the Beatles, Love and Let Die.

The Future Starts Here explores the technologies that are shaping our current world: Gender fluidity, social media, artificial intelligence, climate change, space exploration, the difference in attitudes between the generations, and so on, all with Higgs' characteristic wit and good sense. There's a twist to Higgs' exploration of these topics which the author reveals at the end of the book.

Higgs acknowledges that the world faces important threats, but argues that they can be overcome and argues that dealing with them is better than giving in to pessimism. I agree with him.

There are three big ideas for making a better world promoted in the book: Giving over half of the world to natural areas, allowing species extinction to be halted or at least seriously slowed; implementing a basic income, and overcoming excessive individualism to focus on collective action and networking.

My reaction to those ideas is mixed. The case for expanding natural ideas seems solid to me. About basic income, I am agnostic and still listening to arguments from both sides. As for the supposed excesses of individualism, often a theme in Higgs' works, I confess to remaining unconvinced; my reading of 20th and 21st century history does not convince me that excessive deference to individual rights and liberties is the driving force for crimes and disasters since 1900.

There's a lot in the book about climate change and I agree with Higgs that it's a big problem that requires real action. I do think that Higgs underrates the possible disaster of nuclear war, which I still see as a big threat. His contention that one European country invading another is a thing of the past seemed reasonable when it was written but unfortunately has not aged well.

Still, this is a great book, with wonderful observations in every chapter. Most of the people I work with are much younger than me, and Higgs' discussion of today's young people is a particular delight. I'm giving this book five stars on Goodreads.

There were interesting synchronicities in the book, at least for me. For example, here are some of the sentences in the last paragraph of a book written in 2019, shortly before the pandemic: "Sometimes, a virus has to run its course before you can be cured. Some ideologies need to reach their failed, absurd ends before we can get them out of our system. This is how we will create the antibodies that will protect us from that virus in the future. That's what's happening now."

On a personal note, I wished my father, who died August 15 at age 90, could have read the book. The last book Dad read, I am pretty sure, is a copy of Higgs' Stranger Than We Can Imagine that I gave him. I kept thinking Dad would have enjoyed The Future Starts Here. In the text, John reveals that he was only 3 when his own father died.

An interest in Robert Anton Wilson's writings permeates Higgs' writings, even in books that don't mention RAW directly, such as Stranger Than We Can Imagine. The Future Starts Here name checks RAW, deals with some of his ideas and features interviews with many prominent RAW fans, such as Daisy Campbell and Scott McPherson.

See also Gregory Arnott's review of the book, written in 2020.