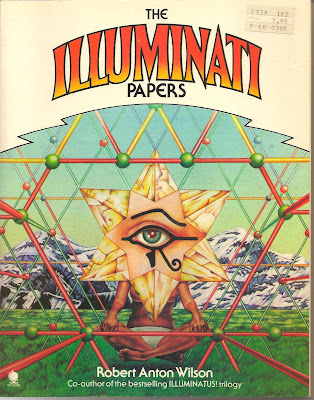 One of my favorite RAW works uses a different order for the Eight Circuits than in Prometheus Rising.

As Hilaritas Press goes about reprinting many of Robert Anton Wilson's works in fresh editions, Rasa has attempted to add value to each new edition. And it's appropriate to bring that up as we conclude Chapter 12, dealing with the sixth circuit, what in Prometheus Rising is described as the Neurogenetic Circuit.

You can of course read any edition you like when participating in this online discussion group, but in the Hilaritas Press edition of the book, there's an "Afterword" by Rasa which wrestles with an unsolved mystery: Why did RAW change the order of Timothy Leary's 6th and 7th circuits in Prometheus Rising, only to revert to Leary's original system in Quantum Psychology?

Rasa lays out the mystery in the Afterword:

"In Timothy Leary's order of the Eight Circuits in his 1977 Exo-Psychology, he calls Circuit 6 Neuro-electric and Circuit 7 Neurogenetic. In Cosmic Trigger I (also 1977), Bob uses the same names and the same order. However, in Prometheus Rising (1983), Bob reverses the order of Circuits 6 and 7.  Circuit 6 becomes the Neurogenetic Circuit and Circuit 7, previously Neuro-electric, is renamed the Metaprogramming Circuit. To add another layer of uncertainty, in 1990 Bob published Quantum Psychology where his description of the Eight Circuits returned to Tim's original order. He renames the Neurogenetic Circuit after Rupert Sheldrake's concept of the Morphogenetic Field to the Morphogenetic System, but the descriptions of Circuits 6 and 7 in Prometheus Rising and Quantum Psychology do not change substantially -- only their sequence."

The Afterword goes into considerable detail about how Rasa queried various RAW experts, the RAW Trust Advisors,  about the mystery without ever being able to reach a definitive conclusion. At the end, Rasa says that he likes the ordering and naming in Prometheus Rising, and explains why but admits, "that's just my thing."

John Higgs is quoted in the Afterward noting that Leary continually revised his Eight Circuit model during all of the second half of his life. And RAW appears to have followed a similar process, revising the model as he thought about it and wrote about it.

The Wikipedia article, "Eight-circuit model of consciousness," lists the eight circuits in Leary's original order, while noting how RAW changed the order in Prometheus Rising. The Wikipedia article also points out that Leary originally had seven circuits, not eight.

The Wikipedia piece also points out that the Eight Circuit model can be tied to RAW's "Eight Winner Scripts" and "Eight Loser Scripts" in the book The Illuminati Papers, (combined here). The scripts, and RAW's listing of "The Eight Circuits of the Nervous System" in The Illuminati Papers, follow Leary's order rather than the one in Prometheus Rising.

Nice synopsis of the neurocircuits order, Tom. What I get out of it - RAW adhered to Leary's order everywhere except for Prometheus Rising. Whether he called it neurogenetic, or neuroelectric, RAW stayed constant with C6 corresponding to Gurdjieff's Higher Emotional and Crowley's HGA. The ambiguity of the ordering reminds us that these delineations serve as theoretical maps for quite a large, and mostly unknown territory.

Rarebit Fiend, I forgot about the Harpo Marx Fool card until you mentioned it. Makes me wonder how much Marx Brothers Crowley saw?

Regarding the balance of the individual with the collective brought up last week, the ending of the Joyce short story Eveline recalls that dynamic. Eveline appears on the threshold of a big life decision, whether to depart with her paramour to seek a new life in foreign lands or whether to remain in her current situation:

"She felt her cheek pale and cold and, out of a maze of distress, she prayed to God to direct her, to show her what was her duty. The boat blew a long mournful whistle into the mist. If she went, tomorrow she would be on the sea with Frank, steaming towards Buenos Ayres. Their passage had been booked. Could she still draw back after everything he had done for her? Her distress awoke a nausea in her body and she kept moving her lips in silent fervent prayer.
A bell clanged upon her heart. She felt him seize her hand:
"Come!"
All the seas of the world tumbled about her heart. He was drawing her into them: he would drown her. She gripped with both hands at the iron railing ..."

Not a perfect analogy. As I read it, Eveline tries to connect with her True Will to make the right decision for herself. This recalls C6 for me, as the HGA represents the epitome of True Will.

I'm still model agnostic about the model. I do prefer the Prometheus Rising order, but only when I want to emphasize the supremacy of the Metaprogrammer, which I kinda like doing.

Recent discoveries in neuroplasticity may lend some credence to the idea that the Metaprogrammer might have some control over the Neurogenetic. Don't quote me on that. I only play a scientist on Internet.

I think the order of the circuits matters only if we are trying to correlate them between lower and higher. I was a couple of weeks ago saying how I see links between C2 and the neurogenetic circuit. I also see some logic in linking C3, manipulating tools and symbols, with the metaprogrammer, which manipulates the tool we have to use symbols (aka the brain/mind).

The order of the lower circuits apparently do matter, because they are chronological in the way they appear in someone's life, as well as recapitulating the evolution of DNA up to humans as they are now. This might suggest that the higher circuits would also be hierarchical, and can only be activated in a specific order. But the more I think about it, the less I see it that way.

According to Stanislav Grof, many people experience spontaneous 'spiritual crisis', where they are sort of catapulted into holotropic states and have visions. Many of them weren't even fooling around with kundalini energy or doing LSD. Unfortunately they often end up being treated for acute psychosis and numbed out with drugs.