The composer associated with George Gurdjieff 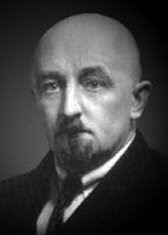 I probably know more about Russian classical music composers than many serious classical music fans. But I confess that until the other day, I did not know the name Thomas de Hartmann. de Hartmann (1885-1956) was a collaborator and student of George Gurdjieff, who of course in mentioned in Robert Anton Wilson's writings. de Hartmann was born in what is now the Ukraine; he studied music in Russia and Germany and later worked in France and the United States.

I wrote an article that appeared this weekend in the Sandusky Register, about conductor Theodore Kuchar.  The bulk of my piece is about how Kuchar is the main conductor for an orchestra in Lviv, Ukraine, and fled the country during the recent invasion; he was in Helsinki, Finland, when I tracked him down via Facebook.

In the course of my piece I had to explain who Kuchar is. He is of Ukrainian American descent and studied at the Cleveland Institute of Music. He has made more than 100 recordings, and is known, for example, for recording all of the symphonies of Prokofiev. He is currently involved in a big project to record de Hartmann's music; he described de Hartmann to me as a "genius composer" with a background similar to Prokofiev's. Kuchar is recording de Hartmann's complete orchestral works and is collaborating with prominent soloists such as violinist Joshua Bell and cellist Matt Haimovitz.

I am a huge fan of Prokofiev and of Kuchar's recordings of the composer, so I asked Kuchar if there's a case that can be made that Prokofiev was the greatest composer of the 20th century. "The fans of Bartok, Shostakovich, Copland, Martinu and many others may have their own opinions. Does Cleveland have the greatest orchestra in the world? Listeners in Berlin, Vienna, Chicago and Lviv may also have their own opinions. This is a very subjective question and most important is that we remain aware, respectful and appreciative of each of these of these," he told me.

Tom Jackson, you can find the whole series of the Gurdjieff/De Hartmann recordings as interpreted by Alain Kremski on youtube. I enjoy very much starting my day with those.

Synchronicity. I've been bugged by how little I know about Russian composers. I'd been a very strict German snob for a long time before I grew up and got over myself. So this is a fun reason to start the trail at a different spot.

Synchronicity that I’d just started a deep dive into G the day you posted this.