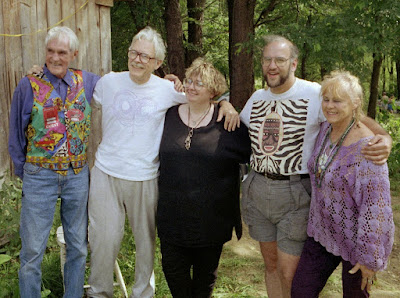 Yes, Robert Anton Wilson defended Timothy Leary in other places, too, but the article newly reprinted by Martin Wagner, "Must We Cage Genius?," seemed particularly impassioned and interesting to me.

All right, Timothy is (has been, will be again) a cocksman, a social butterfly, a lothario, a boozer, a joke, a rowdy, a fun-lover, a hedonist, a sensualist, a rascal. Like Shelley and Shakespeare and Mendeleyev and Uncle Looie. He has also done scientific work which is universally regarded as important in his profession; done more controversial scientific work which may be even more important than that already recognized; written first-rate poetry; made a heroic and athletic jail break at the age of 49; given more love and compassion and understanding every week for ten years than most of us give in our life-times; made dumb political blunders; lied to some of his persecutors and some of his friends; told the truth repeatedly under great hazard to himself; made many women happy and some women sad; and looked at his species with a more remarkable dispassionate analysis than any contemporary writer, scientific or literary. The last claim is a subjective evaluation by me; the rest can be documented with case histories.

Here is RAW's one sentence description of the point of the First Amendment:

Dr. Leary’s felony is exactly that which the Constitution was intended to protect: speaking in favor of ideas that are genuinely new, genuinely offensive, genuinely unpopular.

A couple of questions about the piece: Is the "famous astronomer" referenced in it Carl Sagan? And who is the unnamed physicist who worked on the Orion Project?

... and hi there - long time visitor sharing my 23 cents for the first time. To keep it clean & srene - for now: one may find the exact same article, albeit with a slightly different introduction and title, "Strongly Differing View On Tim", in RAW's "The Starseed Signals" (Hilaritas Press, 2020), pages 288 through 302. I did and do not remember if he actually mentions the Orion Project physicist by name. However, he does write about Carl Sagan paying Dr. Leary a visit in Vacaville.

Just thought I'd drop in and share that, after stumbling upon your questions.

Other than that, to those who haven't read "The Starseed Signals" yet: I recommend doing so, highly.

>Is the "famous astronomer" referenced in it Carl Sagan?
Yes

>who is the unnamed physicist who worked on the Orion Project?
Dr. Ted Taylor?

Thanks to you both. I wonder if the piece was written first and then included in the book?