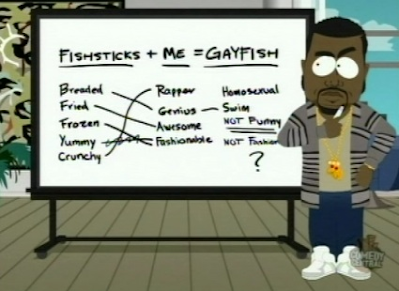 In Stranger Than We Can Imagine, John Higgs considers the curious provenance of Fountain, the urinal submitted as art, signed by “R. Mutt.” Higgs lays out the convincing case that Fountain was not in fact, created by Marcel Duchamp, as history and the artist himself remembered, but by Baroness Elsa von Freytag-Lorinhoven. Higgs, instead of attributing Duchamp’s claim to be the original “R. Mutt” to any perfidiousness, instead discusses the psychological phenomena of the Ebbinghaus Curve of Forgetting and how it can lead to a misattribution of ideas. This is illustrated quite well in the South Park episode “Fishsticks” which revolves around Cartman taking credit for his classmate Jimmy’s joke; while Cartman is obviously a despicable character who is perfidious, the episode shows how Cartman’s memory continues to overwrite the “correct” memory until, beside single handedly writing a joke that become a national hit,  his memories eventually have him simultaneously defeated a dragon and an army of robots.

Because we are on the “Modernism” chapter of Stranger Than We Can Imagine in class, I briefly asked the children if they could remember a time when they knew they had been the first to come up with an idea/say something for which another person later took credit.  Most students raised their hands and many of them had the look of satisfaction that comes whenever you have found an attribution for a very real occurrence for which you had no certain context. I then asked them if it was frustrating, if they couldn’t understand how the other person could be so wrong. Most nodded. I then asked what it means if they were the ones misremembering; that was a surprisingly sobering thought for pre-adolescents. Which is good, because it was a lesson that was hammered home to me my first time reading Prometheus Rising when Wilson brings up the anecdote about Oliver Cromwell:

“Cromwell once addressed the Irish rebels, saying ‘I beseech you, in the bowels of Christ, think it is possible that you might be wrong.’ History does not record that Cromwell ever addressed the same remark to himself.”

Noting that is is highly unlikely Cromwell ever did ask himself the same question, as well as the anal-territorial invocation of Christs’ bowels, this is a clear example of how our main task as we grow neurologically is to doubt our own conclusions, not simply of others we perceive as misguided or lower on ladder of circuits. When Wilson talks about Rationalists, he does so with the bitterness of a model agnostic having to deal with dogmatic materialists; it is frustrating to deal with so-called “skeptics” that are incapable of being skeptical about their own prejudices and instead function as proselytes of their own narrow worldview. Agnosticism extends much further than the existence of a higher power and requires curiosity in being able to function as a useful and healthy philosophy.

Questioning everything, and developing an understanding of the malleability of those organs of our that we believe make up reality, namely memory, perspective and our very self-awareness, seem to be one of the primary purposes of Prometheus Rising. Of course, the corollary to this is using this uncertainty to feed our curiosity so that we may endeavor to do that beyond our realms of experience; to question death and the limits of consciousness. A noble game, and one I hope I play well with others in honor of my wise teachers. Happily, Higgs begins his study of the twentieth century with Relativity and Einstein, so students are first familiarized with the lack of an objective fixed point and the perceptual murkiness of space-time, before we begin chipping away at such fleeting notions as memory. The "Fishsticks" episode also revolves around Kanye West being unable to understand the nuance of a very simple joke and becoming murderous. Considering Kanye today, I think we can find a worldview that is truly baffling.

Thank-you for the post. I feel a little bit at a loss for words.

"History is a nightmare from which none of us can awaken.
– Stephen Prometheus in Carl Jung's Odysseus
Another of the opening quotes from Schrodinger's Cat.
The opening two lines of The Universe Next Door:
The majority of Terrans were six-legged. They had territorial squabbles and politics and wars and a caste system."

Substitute Putin for Cromwell for the current terrorist leader unable to ask themselves if they're wrong. It seems mosbunall politicians appear unable to ask themselves that question. A contemporary cultural, sad but true, cliche appears in the historical documentary series of teenage suburban life in the 1950s, Happy Days, when the dominant alpha male, Fonzie, can't say the word "wrong" in a sentence preceded by the declaration, "I was."

Perhaps Kanye tunes into his metaprogramming instructions from South Park?

Exercize 4 in this chapter tells us to read all the miracles i the New Testament using different filters. I must admit I've been reluctant to do this one, but I will. Here is a link with a list of links for each miracle:
http://www.aboutbibleprophecy.com/miracles.htm

It brought a small measure of joy to see the 2022 Quarter (American 25 cent piece) has a radiant Maya Angelou on its face.

Thank you for sharing your thoughts on this Apuleius, much appreciated.
Since you are using John Higgs' book as a teaching tool, you might be interested in a recent podcast he appeared in, part of the Rethinking Education series.
https://m.soundcloud.com/rethinking-ed-podcast/re34-john-higgs

I am these days doing a bit of travelling in Europe. Last week I paid a visit to Joyce's grave in Zurich and went to a Ulysses centennial exhibition. I unfortunately was too short on time to go see Carl Jung's place in Küsnacht close-by. This week I spent a day in Ingolstadt. Much more Audi cars than illuminati to be seen, I m afraid.

When I ll be back home I might take the time to answer more properly some recent posts, the Michael Johnson insights last week also were interesting, thank you Eric Wagner for those.