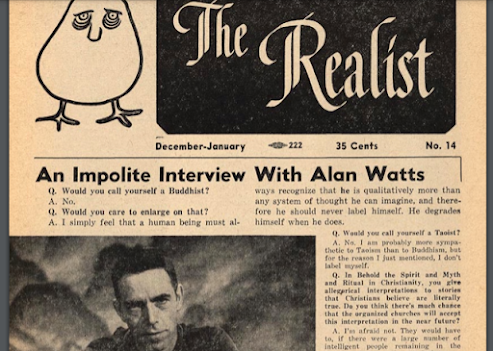 Issue No. 14 of the Realist, December 1959 and January 1960,  (available here as part of the Realist Archive Project) has an "impolite interview" of Alan Watts, conducted by Robert Anton Wilson. Hat tip to @antlerboy on Twitter for pointing to it.  [UPDATE: In the comments, Prop Anon says both Paul Krassner and Wilson did the interview.]

As I was looking at the issue, I noticed something else. A. Finley Schaef, pastor of First Methodist Church of Astoria, N.Y., pens a very brief letter to the editor, printed under the headline "Accusation." It says, "Mr. Robert Anton Wilson's chronic rage against the Church notwithstanding, my impression is he is just another theologian in the Antichrist's clothing."

An editor's note in reply (I assume Paul Krassner) says, "Coincidentally, I accused Mr. Wilson of more or less the same disguise when he chose to title his column in Issue #13 'Notes of a Skeptical Mystic' rather than 'Notes of a Mystical Skeptic.' His response, to both Rev. Schaef and myself:

" 'I admit that I am a mystic. I deny that I am a theologian. For an interesting distinction between mysticism and theology, see Alan Watts' Myth and Ritualism in Christianity. If I were to be pinned down, I would describe myself in Erich Fromm's words -- 'a non-theistic mystic'.' "

Email ThisBlogThis!Share to TwitterShare to FacebookShare to Pinterest
Labels: Alan Watts, The Realist

Paul Krassner and RAW both conducted this interview. Not just RAW