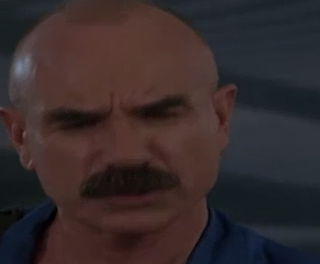 In his "Friday AV Club" column for the Reason magazine website, Jesse Walker pens "G. Gordon Liddy: The Hollywood Years," which includes a detailed review of Return Engagement, the movie about the lecture tour the pair went on, debating each other. The film is "weirdly compelling," Jesse says, detailing Leary's libertarian views and the moments when each man seems to show little self awareness.

The review also touches on the Iran Contra scandal (which Robert Anton Wilson wrote about in Cosmic Trigger 2 and probably other places), and Jesse spots something interesting in a Miami Vice episode, in which Liddy plays a CIA man who smuggles heroin:

"If you think that sounds a lot like Oliver North's covert operations in Central America, you're right. You might even be grinning at the decision to cast a Watergate conspirator in an Iran-contra story, thus uniting the biggest political scandal of the '70s with the biggest political scandal of the '80s. But here's the wild part: 'Stone's War' aired on October 3, 1986. That's exactly one month before the Lebanese news outlet Ash-Shiraa exposed the Iran-contra story. Any old cop show can rip something from the headlines, but how many manage to air their version of the tale first?"