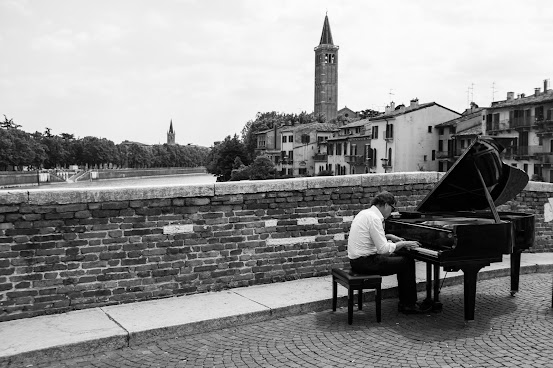 A  scene in Verona, Italy. Unsplash photo by Giuseppe Ruco.

The New York Times runs an interesting article on "Grand Pianola Music," a piece by one of my favorite modern composers, John Adams.

The article explains that the tone of the piece and its unexpected musical juxtapositions was a contrast to the stern modernism still in vogue at the time, but it was Joshua Barone's description of Adams' inspiration that caught my eye:

"It was 1970, and the composer John Adams was tripping on LSD.

"He was at the Marlboro Music Festival in Vermont, and he wandered into a rehearsal for Beethoven’s 'Choral Fantasy,' with the eminent pianist Rudolf Serkin sitting at a Steinway.

"Adams saw — or thought he saw — the piano begin to stretch into a cartoonishly long limousine. A similarly fanciful vision later came to him in a dream: He imagined driving down a California highway as two Steinway grands sped past him, emitting sounds in the heroic vein of Beethoven’s 'Emperor' Concerto and 'Hammerklavier' Sonata."

The resulting piece got a mixed reaction at the time but has been much recorded; this album, on Hoopla Digital, available to most Americans with a library card, has "Grand Pianola Music" and some of Adams' other better-known pieces.

Note: John Adams should not be confused with John Luther Adams, another modern composer who gets a fair amount of ink.