A long interview with Rasa

One way to find out  a lot about Robert Anton Wilson is to talk to Rasa, who runs the RAW Trust and Hilaritas Press for trustee Christina Pearson (RAW's daughter and the the trustee) and who was close to Wilson and his family in Wilson's last years.

Rasa is interviewed in a long podcast (about two hours and 45 minutes) in Episode 23 of the F23 podcast, and it deserves a listen if you want to know more about Wilson, how Hilaritas Press operates, the story behind the "lost" book The Starseed Signals, and much more.

In the first hour, Rasa discusses how he met Wilson and how the two got to know each other. He says how Wilson answered when he was asked what sort of philosopher RAW was. (Rasa forgets to say at first what RAW's answer was, and interviewer Jamie Dodds alertly picks up the thread.)  There's also a lucid explanation of "the universe is non-simultaneously apprehended," one of RAW's favorite sayings.  Rasa also discusses one of RAW's phrases that is commonly misunderstood, and explains how the manuscript of The Starseed Signals was saved (it was Greg Hill's photocopy, and part of the "Discordian Archives" materials that Adam Gorightly has preserved. Rasa's story that it was rescued from a dumpster is an exaggeration; Adam's account is here.)

By "press time" for this blog, I had not consumed the whole podcast, but I'll be working on it through the weekend.

Jamie hopes that if this episode catches your attention, you'll explore other episodes of the F23 podcast,  which include familiar figures of the RAW fandom/Discordian scene, such as Brenton Clutterbuck, Daisy Eris Campbell, Oliver Senton, Kate Alderton and others. 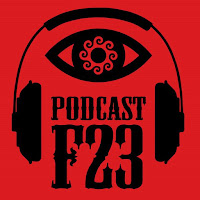 Thank you very much for sharing this podcast.

I don't know if Rasa talks about this in the podcast, but in th RAW-themed Journey to Nutopia he mentions being friends and involved with the 70's psych rock jam band Sweet Smoke. I was delighted to hear that since I own a copy of their classic first album Just A Poke.
It seems though that Rasa only appears on the third and last one, Live.
Here's the album:
https://www.youtube.com/watch?v=YUOdBF6luio

In all honesty I have to admit that I couldn't hear much actual sitar or tambura in it, but the discogs page also credits him (or rather Rick Greenberg) for rhythm guitar. I think that's what he's potrayed as playing on the cover art.

Maybe Rasa can complete or correct this if he's around.

I'm looking forward to listen to the podcast, especially since Rasa was such a pleasure to hear on Nutopia. Seems like he has a lot of stories to tell!
The RAW community has such great and beautiful people.

Digging this podcast, still have about 40 minutes to go. The RAW parts are interesting, of course. I also really enjoy Rasa talking about how a sitar works.

@BGHN Rasa will likely weigh in, but in those days, with that band, he played guitar. He plays the sitar for his band Starseed. See http://starseedmusic.net/ Rasa talks about the band in the podcast.

Lots of nice bits. About an hour and a half in, Rasa explains where the name of Hilaritas Press comes from.

@BGHN Well, I made it to the end of the podcast, and it turns out Rasa had played sitar since he was 16 and did play sitar with the band sometimes. But on the recording you listened to, you were likely hearing him play guitar.

Yes, of course it turned out that Rasa talked at length about Sweet Smoke in the podcast. Just like Bob, it seems like I could listen to him talk for hours on end, what an amazing person he is!
I sure will check out the band Starseed.

Rasa also mentions a bootleg for a Heidelberg show, I assume that it would be this one:
https://www.youtube.com/watch?v=hRNN6duDUyU

Hey BFHN, sorry I just now found your comment. Thanks for all the kind words. Yes, I played with Sweet Smoke when we all first got to Europe in 1970, but I was only jamming at some gigs, playing sitar and improvising solos with the fabulous guitarist Marvin K. I was on my way to India to study music, and actually joined the band a couple years later. Yes, I was only on the last LP, and I was only playing guitar. I did play sitar at all of our concerts, but that didn't make it on the LP. You can hear me playing sitar on that Heidelberg bootleg.