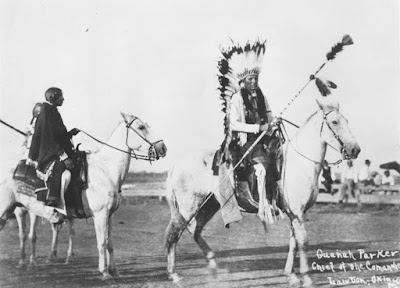 Quanah Parker, the gentleman at right holding a spear.

Rasa and his helpers did a great deal of work on The Starseed Signals, but a couple of mistakes did slip through. The German actor mentioned in Chapter One is Conrad Veidt, not "Conrad Veldt." (He was Major Strasser in "Casablanca.")

Chapter One also has a reference to Quanah Parker as "the great Cheyenne war-chief," when in fact he was a Comanche. Wikipedia has much of his colorful life, which included having as many as eight wives at one time and helping to found the Native American Church, which uses peyote as a sacrament.

I lived for many years in Lawton, Oklahoma, where I worked for the local newspaper. Parker is buried in Comanche County, at Fort Sill. Parker and the Comanche tribe were settled in the Lawton area after being subdued by the U.S. Army, and it's still common for Lawton residents to interact with Comanches. I used to get my hair cut by a Comanche barber, and at the newspaper I worked for many years with a Comanche tribal princess.

Oklahoma, where I grew up, originally was "Indian Territory," a place where Native Americans were settled after their original lands were invaded and occupied. Native Americans from the eastern U.S. such as the Cherokees, Creeks, Choctaws, Seminoles etc. were settled in what became the eastern part of Oklahoma, while tribes from the Great Plains and western U.S., such as the Comanches, were settled in the western part. So, for example, I grew up in Tulsa, which originally was a Creek Indian town, named by the Creeks who settled there. The Lawton area is where Comanche, Kiowa and Apache people were sent. (The Apache leader Geronimo also wound up at Fort Sill.) Eventually, after the rest of the U.S. was settled, Indian Territory was opened up to white settlement, too.

An anecdote: Years ago, while I was waiting to be fed at a buffalo burger cookout at Fort Sill, a beloved annual ritual in the Lawton area, a Comanche in line with me told he he could never figure out how the U.S. government could have forced the famously warlike Cherokees to move to Oklahoma. Given that everyone in Oklahoma had a Cherokee grandmother, he reasoned the Cherokees must have been an enormous tribe, much bigger than the Comanches, and very difficult for the U.S. Army to push around.

Iain Spence:
Thanks for sharing these extra facts along with the corrections. I've just found 2 minor typos which are not so interesting, a couple of spelling errors. The good thing about ebooks & POD is that corrections can be made without much hassle or problems with the ISBN.

My favourite thing about Starseed is the way Bob Wilson keeps coming back to the subject of plant telepathy. I imagine he'd now use the term 'plant resonance', but it's fun to read something which makes me feel like I'm back in the 1970s. I once worked in a greenhouse which had nothing but exotic orchids...It's the nearest I ever felt to The Day of the Triffids. Some of these flowers were so mesmerising.

I don't want to leave the wrong impression. "Starseed" is actually very clean compared to many books I read; I am most of the way through, and I have found few mistakes and typos. I'm interested in the work that went into preparing it; I'll see if Rasa wants to talk about it.

I found your feedback positive & I had no idea that native Americans still ate buffalo meat, albeit rarely. I'm feeling a bit guilty now for not reading Bury my Heart...it's been sitting in my house for years, but it looks like a heavy sombre read.

Missed typos always stick out like a sore thumb for those of us tasked with weeding them out. I think Rasa does a great (fast) job of catching up with them.

I just finished reading JK Rowling's Troubled Blood last week and it has several spelling mistakes. That's especially strange considering it's in the UK top 10 bestselling HBs in fiction. So I imagine most folks will likely give Hilaritas a little patience : )

Thanks, Tom, for the two corrections you mentioned. Iain, is correct, that it is relatively easy to make these corrections to the text. I've already collected some from the amazingly astute Eric Wagner who never fails to find some typos in our new publications! And, yes, let me have some questions about the whole preparation. I'd be happy to tell you what I can.

Thank you for the kind words, Rasa, and for creating Hilaritas Press.