John Higgs on 'Illuminatus' and QAnon 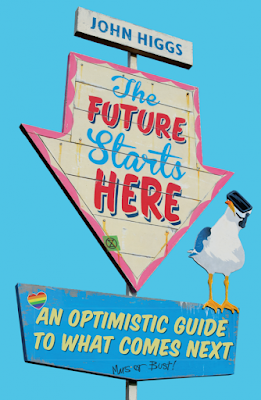 Issue No. 23 of John Higgs' newsletter has news about the new paperback and audiobook editions of The Future Starts Here and the availability of signed books from his website, but there's also a section about how the QAnon conspiracy theories can be discussed by referencing Illuminatus! You will want to read all of John's mini-essay, but here is one paragraph:

Wilson's most famous work The Illuminatus! Trilogy (co-written with Bob Shea, of course) was a satire based on the idea that all conspiracies were true. It's not a book I usually recommend to those curious about Wilson - it's very much a product of its time, and not all of it has aged well. It was written by two staff members at Playboy magazine in the years before second-wave feminism broke through, for example, so it's easy to have issues with it now. But it's still a powerful thing, in terms of its impact on readers. It can rewire people's minds to prevent them falling for bullshit - their own, in particular, but other people's as well.

I have criticized the depiction of women in Illuminatus! (for example here) but having said that I love Illuminatus! and I read it over and over again. I don't know how much of a weakness is really is that the work is "very much a product of its time." Many fine works are a product of their time, as this writer argued in a piece written in 2015 or 2016:

Truly great books tend to have two things in common.

First, they are utterly of their time. They are so absorbed in their specific world that it is inconceivable that they could have come from any other time or place. They can define how we think about that period of history. Think of the work of Geoffrey Chaucer, or Jane Austen, or Charles Dickens.

And secondly, they transcend their time. They are universal, and capture something fundamental about the human experience. They speak to all people in all places at all times. Think again of the same work by Geoffrey Chaucer, Jane Austen and Charles Dickens.

Of course, only time will tell whether Illuminatus! in the long run manages to "speak to all people in all place at all times" as the referenced works do but Illuminatus! is still fresh for me.

By the way, the passage I've just quoted is John Higgs, in the introduction to the Hilaritas Press edition of Cosmic Trigger, released on Feb. 23, 2016.