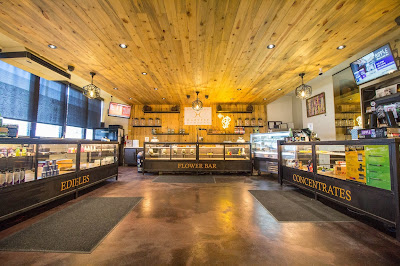 A marijuana shop in Colorado, one of the first states to legalize marijuana. (Photo on Unsplash.com by Alex Person.)

While most attention in the U.S. naturally is fixated on who will be elected president, which party will control Congress etc., there was a development Tuesday of interest to many RAW fans and/or libertarians: The "war on some drugs" suffered setbacks at the polls.

The pandemic probably prevented further wins from taking place; some states require large numbers of signatures to get a measure on the ballot, problematic when people are being advised to avoid crowds. The Politico story linked to above notes that "the pandemic derailed a medical marijuana legalization effort in Idaho and doomed recreational legalization initiatives in Missouri, Arkansas, North Dakota and Oklahoma." In fact, COVID-19 also prevented legalization from advancing in Ohio, where I live.

Before Tuesday, marijuana was legal in 11 states and the District of Columbia: the 11 are Alaska, California, Colorado, Illinois, Maine, Massachusetts, Michigan, Nevada, Oregon, Vermont and Washington. Vermont a few weeks ago became the first state where legalization came from the legislature, rather than a ballot initiative.

Politico says "about 1 in 3 Americans now live in states where marijuana is legal for anyone at least 21 years old." Of course, many others live in a state next to one where pot is legal, and can drive across state borders.

In addition, de facto legalization seems to exist in Oklahoma, my old state, where apparently anyone who wants a medical marijuana license to buy marijuana  can obtain one. I am relying on anecdotal information for that assertion, but the number of marijuana shops in the Sooner State is startling, and the state has even legalized temporary licenses for out of state visitors. I don't know how many states are like that. Ohio has medical marijuana, too, but you have to have a dire illness and medical records to prove it; not that many people qualify.

Thank you for this reminder. I had forgotten all about this.

Bravo! Oregon seems to have gone even further than mushroom-therapy: https://www.foxnews.com/us/oregon-first-state-decriminalize-hard-drugs-heroin-cocaine