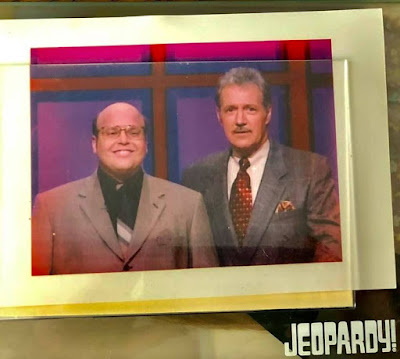 A photo taken 21 years ago of today's special guest blogger, Eric Wagner, with Jeopardy! host Alex Trebek, who died on Nov. 8. Eric was the champion on the episode of the game show and used his winnings to take his wife to Paris.  (Photo posted on Facebook.)

On the morning of October 31, 2020, I found a quarter in the drive through of a Sonic Drive-In before they opened. Later that day I had to take my beloved dog Pookie to an emergency center, and we had to put him to sleep. He would have turned fifteen on November 26. On November 1 I found two quarters at a Taco Bell drive through. An hour and a half later I found my final quarter in that same drive through. I find it an interesting coincidence that I found these quarters in rapid succession after two months of unsuccessful searching at the same time I lost Pookie. In terms of the Thinker and the Prover, before Pookie started throwing up and I took him to the emergency vet, I thought that his health seemed OK. I considered spending a lot of time with him this year a great blessing, a positive side effect of working from home. When people talked about wanted to jump forward in time to the end of the pandemic, I thought that I wanted to treasure each day, because I feared Pookie would not outlive the pandemic. (What the Thinker thinks….) After talking with the vet, I could see how much Pookie was struggling. Before that night I modeled his behavior as normal for an aging dog. Holding him that night I could see his labored breathing and feel how slender he had become, and I could feel his suffering.
After having found the quarters the next day, I decided to continue with creating my own similar experiments. I decided to see if I could flip a coin three times in a row and get heads each time. It took me 19 flips to get three heads in a row. I explained that by selective attention and tried to get three heads in a row again. This time it took ten flips. I explained that by mind over matter and tried again. This time it took 29 flips to get three in a row.
Next I decided to lose a pound. It took me one day. I explained that to myself as selective attention. I tried to lose another pound. Once again it took a day. This time I explained it as mind over matter, and I decided to lose another pound. This time it took me two days. I do not draw any strong conclusions from the quarter or weight loss exercises. My data set seems too small.
After rereading the chapter I confronted the party exercises. Well, during this pandemic I don’t plan to attend any parties, so I decided to use Zoom meetings. At the first one I considered myself ugly, unattractive and boring. I thought of the exercise a number of times during the meeting. I held myself back from making jokes. I did make one joke, and it got a good laugh. Perhaps I usually share weak jokes, but because I thought of myself as boring during this exercise, I held my tongue until I had a strong joke to share.
“Life is just a party, and parties weren’t meant to last.” – Prince, “1999”.
This morning I tried the next party exercise. I didn’t have a particularly strong experience. I will try the exercise again, perhaps at an actual party.
I have observed the Thinker and the Prover in two close friends. I hope to get into discussions with some relative strangers in the near future and observe their Thinkers and Provers. I don’t talk much with relative strangers during the pandemic.
Well, thanks to Zoom I got to talk with a few relative strangers and observe their Thinkers and Provers as well as to observe my own Thinker and Prover. I contemplated my expectations of this Prometheus Rising group. I think I’ve given these exercises a pretty good try over the past 35 years, and I think I’ve gleaned the main lessons from them, but I also think I may have missed the point sometimes, and these exercises may have a lot more to teach me. My Prover sort of has the next 22 months planned out, but it also may prove that I have missed the point and that I can reach new perceptions. Hopefully I will have an even more positive experience with these exercises than I anticipate. We will see. I found the moments when I found those quarters after months of unsuccessful searching very charged. 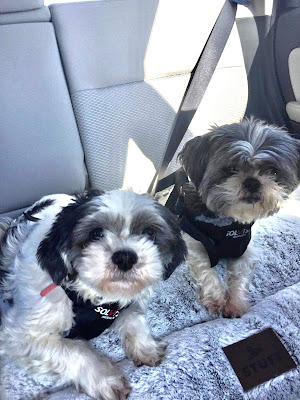 Two of Eric's dogs. Pookie is on the left. The other dog is Maggie, who died two years ago.

I think that if what the thinker thinks the prover prooves prooves accurate then it behooves one to have optimistic thoughts. I think Faucci appears right in reports predicting a 90% effective vaccine available widely by April.

I've been searching for quarters in this airport with no luck yet.

Hi Eric, thanks for sharing some thoughts (a quarter for your thought? Ah!) Was Pookie named after the Pookah ?

As for me, still no luck finding my coin. Today I did find one, but for the second time it is not the kind I set up my mind on. Actually it is the second time that I find a coin like this. It is the smallest existing coin in the local currency and is worth less than the value of the metal itself. As such, it surprises me that I would find some on the ground since I don't see why people even bother carrying any on them.
Perhaps I will never find my local equivalent of a quarter but will end up finding tons of this specific useless kind. If so, I am not sure yet what my thinker would think, but I'm pretty sure that I would have a good laugh.

Well, it seems to me if vaccines are coming soon, people should try to be careful a few more months. But apparently that's a difficult cases to make.

No, we named him after Pookie from the Soupy Sales show.

Apologies for the spelling errors earlier, my brain decide prove needed two os, and was rushing to post before boarding a flight. I once set up an art gallery called Troov, named after a character from Beelzebub's Tales, must be some random Troov neurons running around my brain.

A few synchronicities after the last comment. Continued reading Starseed Signals with the Leary interview near the end; he advocates optimism in it. Finished that book then started one by Victor Wooten, The Music Lesson that a client had sent me. I didn't know, but he lives and sets the scene in Nashville where I flew from. My client wrote a long note to me on the inside front cover that finished with a RAW quote about optimism.

I looked for quarters in 3 airports and a convenience store on the trip back without success. Very exhausted that night, had a dream that I searched and found a quarter. It glowed and emitted a bright white light and I felt so happy in the dream for completing the exercise.