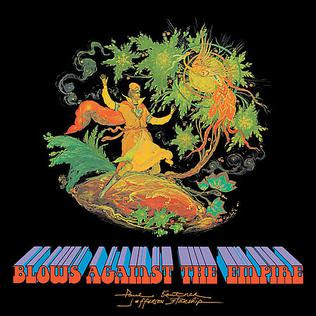 I've always listened to a lot of music, and a wide variety, too, including rock music and classical. Nowadays , I listen mostly to classical; in college in the 1970s, although I did listen to recordings of Stravinsky and Bach and other classical composers, I mostly listened to rock, including many Jefferson Airplane/Starship albums and solo albums made by members of those bands.

I now regret that and wish I had explored classical more in those days, but the upside is I can explain a reference to Jefferson Starship in The Starseed Signals.

At the end of Chapter 13, RAW quotes these lyrics, attributing them to the Jefferson Starship:

RAW in fact gets the lyrics slightly wrong; he writes "Burn, witch, burn" instead of "Hide witch hide."

In any event, he is quoting from the opening of "Mau Mau (Amerikon)" the opening track of the album Blows Against the Empire, released in November 1970 under the name Paul Kantner and Jefferson Starship.  The songwriting credits for "Mau Mau" are Kantner, Grace Slick and Joey Covington. The album includes contributions from just about every San Francisco rock musician at the time and has a suite of songs on Side Two about hijacking a starship. Here is an interesting bit from the Wikipedia article:

"By Kantner's admission, the underlying premise of the narrative was derived in part from the works of science fiction author Robert A. Heinlein, particularly the novel Methuselah's Children. Kantner went so far as to write to Heinlein to obtain permission to use his ideas. Heinlein wrote back that over the years many people had used his ideas, but Paul was the first one to ask for permission, which he granted. In 1971, Blows was the first rock album ever nominated for a Hugo Award in the category of Best Dramatic Presentation. Although it received the plurality of the vote among the five nominated works, the majority of voters elected not to issue the award that year."

Kantner (1941-2016) was the Jefferson Airplane's most prolific songwriter; he and Grace Slick had a daughter, China, who was an MTV VJ in the 1980s and also has worked as an actress. Here is a bit from Paul Kantner's Wikipedia bio: "Identifying as a political anarchist, Kantner advocated the use of entheogens such as LSD for mind expansion and spiritual growth, and was a prominent advocate of the legalization of marijuana, which he regularly consumed for most of his adult life." I don't know if he and RAW ever met, but they must have known some of the same people in San Francisco.  UPDATE: See the comment below from R.U. Sirius.

Kantner co-wrote the tune "Wooden Ships," recorded both by Crosby, Stills and Nash and by Jefferson Airplane.

I saw Kantner at RAW events and at Leary events... always very quiet at the back of the room. He was pretty close to Leary. Don't know if he ever approached Bob.