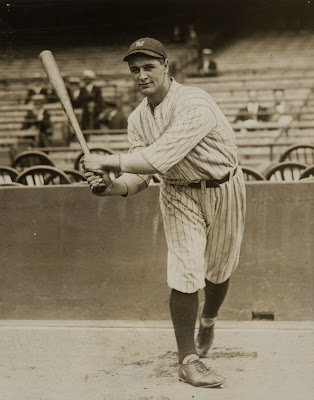 Timothy Leary apparently liked baseball, but I don't remember seeing Robert Anton Wilson talk much about the sport until I read The Starseed Signals, where a search reveals the word "baseball" is mentioned nine times. (It's mentioned six times in Cosmic Trigger.) Chapter Four of The Starseed Signals has particularly interesting discussion from Leary about baseball, but it's clear that RAW also understands the basics of the game.

That made me wonder if RAW ever showed any interest in baseball, so I asked a couple of people who knew him well, Eric Wagner and Scott Apel.

Eric Wagner: "At the time of Bob Wilson’s birth in 1932, baseball had a huge popularity as the national pasttime. I never heard him talk about baseball, but I think it formed part of his culture. I only recall him talking about sports once. In 1988 I told him one of my English professors called Ezra Pound a failed poet. Bob said, “Calling Ezra Pound a failed poet is like calling Joe Lewis a failed boxer.”

Scott Apel: "As far as RAW and baseball, I can't recall ever discussing that or any other sport with Bob. I'm not a sports fan, and neither was he. Might be a holdover from his childhood days -- when you live in NYC, you have the Yankees, and growing up as he did in the '40s, baseball and radio were about all there was for entertainment (and movies, of course, and comic books and literature). I theorize this because I was a baseball fan as a child living near Chicago in the '50s, and went to many Cubs and White Sox games with my dad and grandfather. Once we moved to California in 1960, however, I lost all interest -- gotta be one of the most boring sports ever. (I used to suggest that they play two games simultaneously, on two adjacent fields, so while nothing was happening during one game, you could look over and watch the other.) Last ballgame I ever went to was the Giants at Candlestick Park in 1963. So, sorry, but I can't be of any help with details about RAW's interest."

I noticed that both of them pointed out a child growing up in New York City could hardly be unaware of the New York Yankees, the most dominant team in baseball.

I loathe sports and baseball was the first one I quit playing. I was in third grade and there were two games where the only way I got to first base was being hit by the ball. I'm happy other people get something out of it.

I once told a friend I could connect any human subject to occultism except sports. Then I remembered that Alfred Doubleday was perhaps a Theosophist. It's everywhere.

RAW was born in Brooklyn, so he was more likely to be a Dodger fan.

I loved baseball growing up in Cleveland, football too; moving to Canada brought an interest in hockey, the entire country halted to watch the underdog Canadians play the Russians for the first time in the early 70s. I lost interest in sports in my late 20s - early 30s but have fond memories. The consensus that Abner Doubleday invented baseball appears an origin myth.

Interesting inquiry here. I also don't recall ever reading RAW mention baseball, even though (as someone who grew up in NYC myself) I agree that he having grown up in NYC makes it a near certainty that baseball was part of his world.

Baseball was one of my first loves as a kid and as an adult it's become an out of control obsession much like my love for literature. In fact, the last few years I've become deeply interested in 3 authors who I discovered shared my passion for both Finnegans Wake and Baseball. Those 3 being: David Markson, Lawrence Ferlinghetti, and Delmore Schwartz. All 3 also spent their childhood in NY.

Was listening to a lecture from RAW recently where he quoted Casey Stengel, so I think it's safe to say baseball was part of his worldview.