Rasa talks about editing 'Starseed' and other 'lost' RAW titles 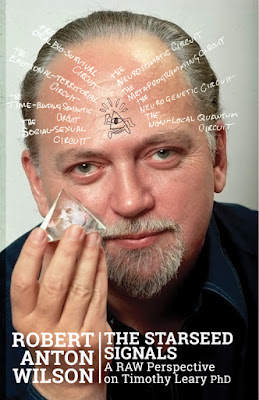 When I had finished reading The Starseed Signals, I wondered about other books that RAW apparently worked on at the time but never published. I also wanted to learn more about the work that was done in putting the book together. (I could tell it took a lot of work, but I was curious about the specifics of reconstructing the manuscript.) Hilaritas Press editor Rasa, with his usual generosity of spirit, agreed to take my questions about the matter, so here are my questions and his answers. -- The Management.

RAWIllumination: The Starseed Signals apparently is not the only "lost" RAW book. The text and the supplementary correspondence make it clear that RAW at about the same time as he worked on The Starseed Signals was working on a couple of other books, one about Aleister Crowley and the other about the science of trying to obtain life extension. Do we know how far he got, and are there any traces of these manuscripts?

Are there any other "lost" books known to exist, and does Hilaritas have any other "lost" RAW books in preparation, as opposed to putting together new collections of all of the various short pieces he published over the years?

Rasa: Sadly, as we’ve noted, RAW was not very good in keeping his papers intact. Add to that that the family moved some 20 times, and we are afraid that a lot may have been lost. There are no traces of any other books other than The Tale of the Tribe. In looking through RAW’s last computer, I found a manuscript for Tribe that RAW had started, but he didn’t get very far. We assembled a small team of experts to pore over the document and try to figure out if it is worth publishing. We are still working on that project, but I’m afraid that there is not a lot to work with. Finding The Starseed Signals was a case of lucky coincidances. In my dream list of future coincidances, I would love to find books four and five of the Historical Illuminatus Chronicles – if I had a choice in what serendipity may hold. We are not holding our breaths on that. We are relatively certain those books never got written.

RAWIllumination.net: I want books four and five of Historical Illuminatus!  too, but my particular obsession is the years of "lost" correspondence  between RAW and Robert Shea. RAW even wrote in CT3 that he'd like to see it collected in a book someday, but (as far as I can tell) neither man actually bothered to save it in a  useful way.

Rasa: There were a couple of sections of The Starseed Signals that were simply too hard to read without a LOT of effort. In one case, we simply put the effort in and were able to figure out the entire passage. In another case, we found a section that was very hard to read (In these cases, RVP simply put in the book, “Original text indecipherable”), but after some research, we figured out those couple of paragraphs were used in Cosmic Trigger, nearly verbatim. That was the only place in the book where RAW didn’t totally rewrite a passage that later found its way into Cosmic Trigger. We were really lucky that passage, largely impossible to fully read in the type written manuscript, seemed largely the same in Cosmic Trigger. In a couple of other places, RAW had put articles into the book from other sources, and a couple of those were simply left out because RAW’s photocopies were too hard to read. With a bit of research, we were able to track down the original articles. In other cases, RVP simply pasted in the poor photocopies. We transcribed all the articles so they would be easy to read.

RAWIllumination.net: How were RAW's original drawings redone to make them legible? Did you do the tables yourself, Rasa?

Rasa: All of the charts and drawings were done by RAW by hand, and so they mostly looked very rough, and even a bit hard to read. What I called the “Kether” chart, had a nice flow to its spiral line, and I thought that rough drawing would still work. I did replace much of the text in that drawing, but I used a font that was similar to the typewriter font RAW originally used, so the whole chart, now easy to read, looks a lot like RAW’s original. I redesigned all the other tables and charts. I’m fairly certain that was RAW’s practice – to draw what he wanted and then have his publisher reconstruct it so it would be legible.

I think what is simultaneously both satisfying and mildly frustrating is that we are finally able to create versions of RAW’s books that we think he would have loved. We are even taking any typos readers may still find, and updating our editions, so that we can finally clean up those tiny, but irritating issues that RAW often complained about. He even wrote in the Fore-word for Quantum Psychology about how “amusing” it was to have a name in one of his books continually misspelled. In The New Inquisition, New Falcon changed the name of philosopher/physicist Mario Bunge, to “Munge” – throughout the entire book! RAW claims it may have been his mistake, but we are guessing he was being polite in not publicly blaming New Falcon. One of our amazingly well-educated proofreaders, Alfonso Montuori, in this case, discovered that error, and I later found that interview where RAW joked about it – using it as an example of chaos getting the better of him. He was amused by that, but we know from personal conversations that he hated any errors in his books, and that was one of his major complaints about his previous publishers – that those corrections were seldom, if at all, fixed in edition after edition. We are thrilled to take the time necessary to make these new editions RAW-worthy, but we are mildly frustrated that RAW never got to see what he so often desired.

Lots of other Starseed coverage here.

What an impressive amount of work that goes into something like this. Definitely on my 'must-buy' list this coming week. At the very least, to reward such a great effort.