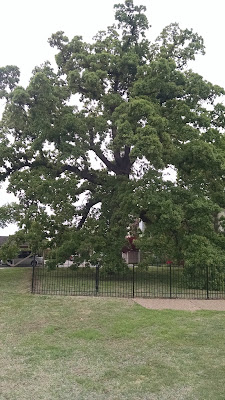 In a blog post in 2014, I mentioned the fabled Glastonbury Tor, a place in England where John Higgs and others scattered a portion of Timothy Leary's ashes. (From Wikipedia: "The Tor seems to have been called Ynys yr Afalon (meaning "The Isle of Avalon") by the Britons and is believed by some, including the 12th and 13th century writer Gerald of Wales, to be the Avalon of Arthurian legend."

Last week, when I visited Tulsa, Oklahoma, where I am from, I visited another interesting place, the site of the founding of the city. The Creek Council Oak Tree is where Tulsa was founded by a group of Creek Indians (Muskogee Indians) after the Trail of Tears. From Wikipedia:

In 1836, after their arrival, the Lochapokas chose an oak tree on top of a hill that overlooked the Arkansas River as the site of their council ground. They lit a new ceremonial fire, using coals they had carried on their journey, established a busk ground, where all council business would be conducted.

The oak tree on the site is supposed to be the same one.