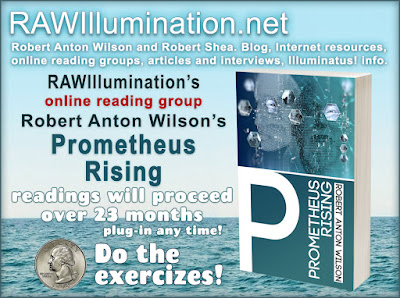 Wilson’s preface seems to be perfectly apropos to the moment in spacetime identified as November 2, 2020 CE (according to the Gregorian reckoning). The quotes that preface his preface “Screw the government!” and “Screw the middle class!” speak to the increasing strain on the tattered remains of the social contract. (To an extent: is there even a middle class to screw anymore?) And while I don’t expect a Biden victory tomorrow (or later this month, or next month, or…) to make me in love with our government, there’s the distinct chance that many of us will hate our government even more, somehow, over the next four years. What a damn mess.

Wilson’s references to the original form of Prometheus Rising as a doctoral dissertation on the “Neuro-Sociological Circuits” and his recounting of editing the book to only introduce Leary partway through the book in progress speaks directly to the head-change accounted for in the recently published Starseed Signals. While I’ve seen a lot of reviews or asides about The Starseed Signals mention that it is “dated,” what manuscript from 45 years ago wouldn’t be, the process of creating the model of neurological circuits is extremely relevant to our journey through Prometheus Rising.

Personally, I’m inclined to suspect that RAW’s sentiments in his preface about his “over-optimistic predictions” are correct; insofar as while we have not arrived at the shining future Wilson boldly predicted, there are signs of progress and human tenacity. The collaboration between SpaceX and NASA is truly inspiring, even if Higgs’ assessment of Mars colonization proves to be entirely correct. Life extension isn’t doing too hot and tomorrow will really demonstrate our amount of intelligence or lack thereof. I’m not feeling hopeful about an increase of intelligence.

Granted, we now have a sizable chunk of the vast sum of human knowledge at our fingertips, but the human mind has proven woefully inadequate to dealing with the challenge of the information deluge that is the Internet. Instead of bitching about Gen X, I instead will bitch about Gen Z, the first generation of minds completely warped by glowing screens. Working with the new generation, I see a lot of hope for growth, and a lot of dismal stupidity. Twenty three year old Internet Marxists seem to believe that a Trump reelection, “because the Democrats are no better,” will usher in the societal revolution to usher in a communist utopia with an economy based on OnlyFans and fanart commissions. Disturbingly, I’ve witnessed members of the younger generation discussing how Stalinism is a viable political philosophy simply slandered by the capitalist West. My eyes can only roll so much before I sever an optic nerve.

And while I’m sure that Paideia was a fine college, alternate education isn’t the leftist dream that it was in the late Seventies. Now alternate education means further social stratification through charter schools and defunding our already woefully underfunded educational system. Are kids smarter today than they were in 1997? Doubtful. Teacher’s hands are so tied by Common Core standards, testing, parental “concerns,” and societal animus against them that we’re lucky to be able to teach anything aside from platitudes, how to tie your shoe, and basic math.

I would very much like to be floating in a L5 Lagrange space station right now, toking blissfully in the light of the earth and the shadow of space, alas that RAW’s world didn’t come to fruition according to his original schedule. Instead of reaching for the stars like Leary dreamed humanity would be doing, our society resembles the wilderness brutality of The Edge.

In my own wilderness, I haven’t found  a single quarter yet, although I did have a curious dream a couple nights ago about an old man spilling dimes into my hands. I’m not sure what to make of that.

I guess we can make fire out of ice, but can we build a better world on its current foundation of blood and shit? This week we’ll perhaps get to see how quickly a nation can sink. Readers, keep rising, and when things get awful retreat to the high ground.

Very thoughtful opening commentary, lots to consider there. Last week I also began vividly visualizing Joe Biden working in the Oval Room as the next POTUS along with finding quarters. I worked almost entirely in the home studio, no opportunity to even look for the latter, let alone find. I'm reading Starseed Signals now with immense enjoyment, appreciation, and gratitude that the powers that be released this Beacon of intelligence, love, hope and sanity at this extremely divisive moment in the human landscape. You could consider it "dated" from the pov of the latest meme trending on fb or twitter; from an esoteric pov, you could see it beautifully dated for right now. Intelligence increase seems alive and well from this neck of the woods albeit mostly occult, definitely not a sociological consensus. Obviously, we have work to do. The title of chapter 8: One Star In Sight. Gurdjieff continued teaching classes in Paris during the Nazi occupation and survived to see that insanity fall. Intelligence increase will continue to grow and expand whichever way the political circus goes. Peace to all sides.

I found a quarter on Halloween in a Rally's drive through before they opened. I found two quarters in a Taco Bell drive through the next day, and I found my final quarter in the same place an hour and a half later.

Happy Day of the Dead! I had forgotten that Coco has a dog named Dante.

No quarters yet for me... I keep forgetting to look when I am on my walks. I've seen dimes twice, but I let them be (I'm not really in the market for dimes).

Still looking for my quarter.

Perhaps the political situation will improve. I saw a Russian politics joke on Twitter the other day: "This year isn't so bad! True, it's worse than last year, but it's better than next year is going to be."

I don't have much hope on the political sphere. I hope to be proven wrong, but too many people on both sides are treating people on the other side as, well, deplorables, and I find it terrifying and depressing.

I have not found my third quarter yet, but I've been more concerned with visualizing a house than visualizing quarters.

Hello! I'm late to class. I posted a lengthy comment in the Chapter One (or was it Two?) thread. Maybe I shoulda posted here instead.

@phodecidus I will make sure people see it.