Columbus NASFiC has been canceled 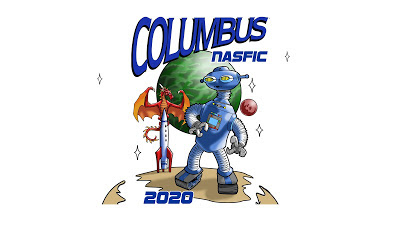 Following yesterday's good news about Maybe Day, here is some bad news, albeit news that was not unexpected: The Columbus NASFiC (North American Science Fiction Convention) has been canceled.

It was a big convention that was supposed to be held August 20-23 in Columbus, Ohio, and I mention it here because I had been working to put together programming and offerings for Robert Anton Wilson fans. Hilaritas Press had agreed to purchase two tables in the dealer's room and I had been working with Christina Pearson, Rasa, Bobby Campbell and Gregory Arnott. I want to thank Christina and the others for their support. I guess it wasn't meant to be.

For obvious reasons I had doubted in recent weeks that the convention would be held, or that it would even be wise for me to go, and I canceled my hotel reservation recently. And now Thursday came the official news of the convention's cancellation.

Here is the notice on the Columbus NASFiC website:

This is the statement I have been hoping we would not have to make, but it is with a heavy heart that I and the executive committee, in consultation with Hotel management and the local Convention and Visitor’s Bureau, announce that we have made the decision to  cancel the Columbus 2020 NASFiC.  Due to the uncertain health situation and the unreliable travel restrictions, it was decided by all that hosting the NASFiC at this time would be unwise.

We will not be offering any refunds but, that being said, we still plan on publishing a souvenir book for all attending and supporting members.

We may have a virtual event  on the weekend of August 20 -23.  We’ll update everyone on that later once we have some plans.

We were very much looking forward to hosting  the North American Science Fiction Convention this fall with you and regret that it cannot happen.