Next year in Columbus? 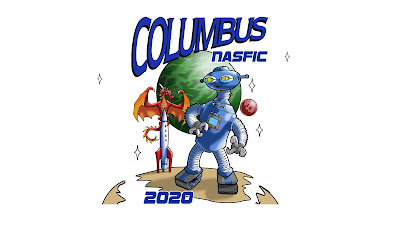 I am planning to attend the NASFiC in Columbus, Ohio,  in August 2020.

The North American Science Fiction Convention is held in years when the Worldcon is overseas; the 2020 Worldcon will be in New Zealand, so we get another NASFiC, which while not quite a Worldcon is pretty big.

The Columbus NASFiC is August 20-23; details at the official site.  I've already bought a membership.

I hope to help organize some sort of activities for RAW fans, much as I did at Confluence, a SF convention I attended in 2018 in Pittsburgh. All of  this is very preliminary and relevant details haven't been announced by the convention yet, but if you like going to SF conventions and  you are a RAW fan, keep next year's NASFiC in mind.

I attended the 1987 NASFIC in Phoenix. I have not attended a World Con since San Francisco in 1993 where I heard Eric Drexler talk about nanotechnology.

I have been to a number of worldcons, but not recently. I went to a NASFiC in Atlanta years ago. I'm hoping to make a "worldcon comeback" in 2021 in Washington, D.C.