What happened to the fourth book? 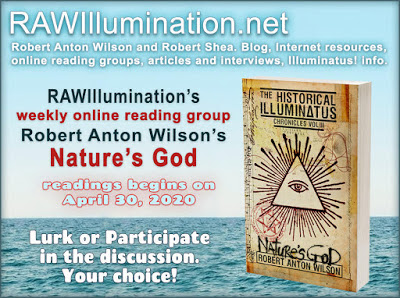 Eric Wagner's Introduction to Nature's God includes this note from the Hilaritas Press: "Sadly, the Robert Anton Wilson Trust has not found any evidence of a fourth volume of the Historical Illuminatus Chronicles."

The original plan had been for the chronicles to consist of five books.

Wilson kept his agent, Al Zuckerman, and his editor, James Frenkel, in the dark about getting the fourth book completed, although he implied he had worked on it. See this paragraph from my 2010 article "The Widow's Son -- editing RAW's favorite book."

“He could say something to you, and you had no idea whatsoever whether he was making it all up or telling the absolute truth. It was impossible to tell. He said everything with the exact same sense of earnestness,” Frenkel said, recalling a luncheon with Wilson and Wilson’s agent, Al Zuckerman, when Wilson was supposed to be finishing The World Turned Upside Down. It was the projected fourth book of The Historical Illuminatus Chronicles. Wilson said he would finish the book soon, but in fact it was never completed, Frenkel said.

Bob had a tremendous run of bad luck when multiple publishers went out of business over the course of the publication of the first three volumes.