'Hefner vs. The Narcs' 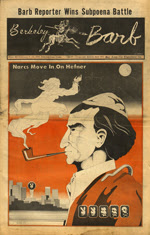 "Hefner vs. the Narcs" is another great rediscovery by Martin Wagner, Robert Anton Wilson's take on the suicide of Hugh Hefner aide Bobbie Arnstein when she was targeted on drug charges by the federal government, apparently in an unsuccessful bid to get Hefner. It includes some of Wilson's bitterest denunciations of the war on drugs. Excerpt:

The Drug Enforcement Administration has the morals of a scorpion, the mental set of Ghenghis Khan and the general love ability of the Gestapo, combined with the fanaticism of the Holy Inquisition, the ferocity of Anthony Comstock and the frenzy of a Fundamentalist. It is the kind of organization that seems to belong naturally in Stalin’s Russia; nobody can ever possibly believe that such an apparatus of terror exists right here, under the noses of the ACLU, until it has stomped into your own life, and then it is too late to warn others.
on May 17, 2020

This was written years ago, before the War on Terror, which Gore Vidal said made as much sense as a war on dandruff.

A few years ago there was a news story saying that some captains of industry were doing Adderall* while others favored microdoses of LSD. 50 years back, Wilson & I suggested that the future might be decided by a battle between the speed freaks and the acidheads. The Very Serious People laughed at us.

* Alleged fave high of the only president we’ve got.

Where did you write that, Supergee? Is there a fanzine online?

I said it before I was aware of fandom. Many people were saying it in the late 60s/early 70s.