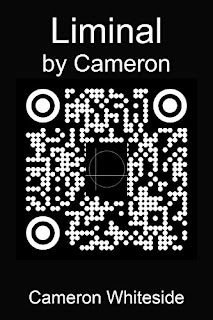 I'm on the email list for Joseph Matheny, (author of Ong's Hat, friend of RAW, released Robert Anton Wilson: The Lost Studio Session etc.) and I got an email for his list from him a few days ago, subject "An unusual offer."

I generally do not use this email list to promote the work of others but in this case, I have decided to make an exception. You may have heard me mention a work on this podcast, that many of us in the community have been receiving links and communique about, from a mysterious character calling himself, Cameron.

People like Julian Langer, author of Feral Consciousness have reviewed this work recently and no less than Nick Herbert said when asked if he had read it:

"I made the mistake of reading Liminal before going to bed. It really influenced my dreams = every person and everything has a hidden purpose some of which you are in on and some not. After I had finished the "proposal" I saw my collection of laptops and pads as sinister apertures into a clinging needy system that only wants to do me good (your buying habits indicate that you'd probably like this new Wampus) at an indeterminate price (you're basically nobody unless you own a Limulus D).
It's a scary piece of writing. And a nice logo too: reminded me of my early algebra classes -- draw a circle of radius R on the Cartesian X-Y plane in such a way that it encloses the origin but is not centered there.
What is the equation for this circle?
Where does this symbol come from?
A preview of a slice of madness."

So I became intrigued and read it myself. Afterward I wrote to the "publisher" and asked if they could put me in touch with the author, being that some of my work was referenced in the opening scene. They wrote back and said the author is MIA but that they know who I am and asked if I wanted some free copies to distribute to my list. So, now here I am, with 23 copies of Liminal: By Cameron that all need a home.

Mr. Matheny said he would mail a copy to the first 23 people in the U.S. who asked for one; I replied quickly and sure enough, the book showed up in the mail a couple of days later. (I haven't had time to read it yet.)

The sequel is that in an email I got Monday, Matheny said that in response to all of the disappointed people who missed out on getting a copy, the publisher is making the ebook free for four days. So if you act fast, you can get it free from Amazon. Remember that if you don't own a Kindle, you can read it on a Kindle app.