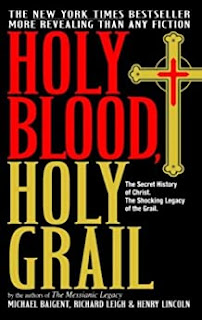 Last week, I posted about a mystery that has vexed Robert Anton Wilson fans: Why didn't he write The World Turned Upside Down? The Historical Illuminatus Chronicles was supposed to consist of five books and we only got three.

Here's a theory: The books did so poorly in the marketplace Wilson finally concluded the reward was not worth the effort.

An earlier blog post perhaps underscores the point. Back in 2012, I wondered if the lawyers who defended Dan Brown when he was sued for plagiarism over his use of Holy Blood, Holy Grail in The Da Vinci Code were familiar with The Widow's Son, which of course also draws upon Holy Blood, Holy Grail for a major plot point. The answer was no.

It seems striking to me that neither Brown's lawyers nor anyone they knew were familiar with The Widow's Son. Nobody got in touch with them during the trial to tip them off about the book.

When I want an example of extreme dumbing-down, I say, “Like turning The Widow’s Son into The Da Vinci Code.”

The Da Vinci Code was a disaster, which was unfortunate as Angels and Demons, the only other of Brown's books I've read, was a fairly good read.

HBHG gets a fair amount of space in Cosmic Trigger III, as well as Everything is Under Control, so RAW did give it a good deal of attention.

As far as RAW's books not selling, my first question would be whether he ever had an agent. Only his first few books went to a major publisher. Small publishers aren't going to have the money for a publicity campaign, or a reasonable advance.

Several of his books were translated into German. Were there any into other languages.

Despite Dan Brown's poor effort in The Da Vinci Code, I think that the HBHG scenario would make an interesting background for a fictional alternate universe.

@Giordanista, He did have an agent, Al Zuckerman, as I noted last week (also Robert Shea's agent.) All of Wilson's novels were put out by major publishers. Many of his later books were indeed released by New Falcon, a small press, which also kept much of his fiction in print. Dell retained Illuminatus!

I don't know about the history of Wilson's work being translated into other languages; it's a good question.