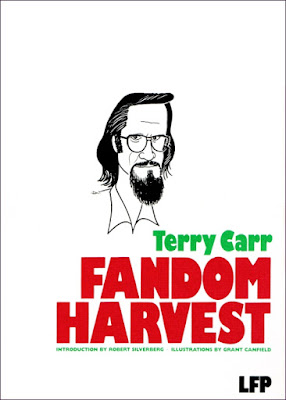 Eric Wagner's Introduction for Nature's God has a footnote that touches on science fiction fandom. He writes, "Some science fiction fans in the 1940's worshiped a deity named Ghu, who caused typos in fanzines. In his honor they inserted h's in various words: bheer, ghod, etc.")

I have been reading classics of fannish writing available at the TransAtlantic Fan Fund
Free Ebooks website -- Ah! Sweet Idiocy! by Francis T. Laney last year (maybe not so much a classic as a historical curiosity) and just recently, Fandom Harvest by Terry Carr (also a writer and famous SF editor.) I've been wondering lately whether fannish writing will ever get recognition, outside of fandom itself, and will be remembered. It was sometimes a source of often quite good writing, although for a limited audience. It's a literary movement, separate from science fiction itself, that hasn't gotten much attention from the mainstream. The internet seems to offer  hope that some fanzines will be preserved and maybe even read.

I don't know if Eric intended a larger point or just wanted to offer an interesting and amusing aside, but the creation of the mock god Ghu in the 1940's seems to prefigure Discordianism and other later created religions.

There's always been considerable overlap between SF fandom and RAW fandom; one example familiar to readers of this blog is BNF (big name fan) Arthur Hlavaty, multiple "Best Fan Writer" Hugo nominee and also a prominent RAW fan mentioned once or twice in RAW's books. While of course he blogs, he also still issues actual fanzines, and happy fanniversary to him. (See also this Hlavaty fanzine archive, and this one. Lots of good reading!) Some of us also have been involved in fandom; I am not a BNF but I formerly belonged to APA-50 and (for a shorter time) to FAPA, have contributed occasional articles and LOCs (letters of comment) to fanzines and attended conventions. I have an "attending" membership in the New Zealand worldcon this year, which has gone virtual. I don't know how active Eric has been, but if he knows esoterica such as "Ghu" he's an insider.

Perhaps my favorite of the old fannish writers was Redd Boggs. I used to republish  his fanzines in APA-50, so that some of my fannish friends would know about him. I can't find any of his zines online.

Tom, I consider you a BNF. I first encountered RAW in an interview in the fanzine Science Fiction Review. Bob used to do a lot of short pieces for them as well. Bob also wrote a great piece “How to Make It as a Writer” for Algol.

We have become gafiation nation.

Thank you. Most appreciated.