More on the mystery of the missing fourth book 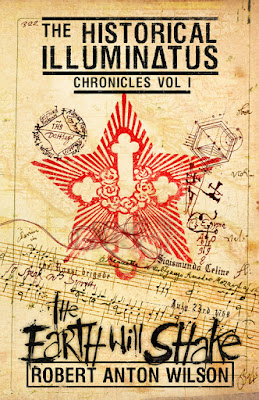 Yesterday, I noted that Robert Anton Wilson apparently didn't get very far in the fourth book of the planned five Historical Illuminatus! book, and Eric Wagner remarked, in the comments, "Bob had a tremendous run of bad luck when multiple publishers went out of business over the course of the publication of the first three volumes."

I don't know the entire publishing history of the first three books, but certainly the series got off to a rough start. D. Scott Apel writes in the biographical essay "BOB AND ME: A Record of a 30 Year Friendship" in last year's Beyond Chaos and Beyond that the first book of the series, The Earth Will Shake, was published by Tarcher, the "New Age" publishing imprint of Jeremy Tarcher.

"But sales were poor enough that Tarcher passed on publishing the remaining books of the Historical Illuminatus Chronicles, which, as might be expected, pissed Bob off no end," Apel writes, adding that Wilson hated Tarcher.

Apel himself remained friendly with Tarcher's wife, ventriloquist Shari Lewis. He writes, "... to this day I have no idea if Tarcher actually screwed Bob over -- he always impressed me as an intelligent, ethical individual, even if he was a publisher -- or if Bob's imagination had bested his objective analysis of the situation."

According to the Hilaritas Press edition of Nature's God, the novel originally was published by ROC Penguin in 1991. According to Wikipedia, Roc Books still exists as a fantasy imprint of Penguin Group. As yesterday's blog post suggests, editor James Frenkel clearly had planned to publish The World Turned Upside Down, the planned next book in the series. According to the Hilaritas edition of The Widow's Son, it was published in 1985 by Bluejay, reprinted by Lynx in 1989 and reprinted by ROC Penguin in 1991. The Earth Will Shake also was issued by multiple publishers, including a ROC Penguin edition in 1991. New Falcon later kept the series in print until Hilaritas Press took them over. Bluejay Books was started by Frenkel and no longer exists, but Frenkel persisted in publishing Wilson. So the lack of a willing publisher does not seem to explain why The World Upside Down never appeared.

I wonder what ever happened to RAW's, Starseed Signals, another lost book. It was about to be released just a few years ago. I haven't read Cosmic Trigger (I) for a while now, so it would be nice to return to it in the form of Starseed Signals. Apparently a lot of it fed into the first Trigger.
Perhaps the publishers ran out of money? I wonder if Hilaritas Press might take it on in a few years time when they're less busy.
At 340 pages long it may contain some fascinating chapters...
I've searched for it on your blog here...but the trail stops around 2017.