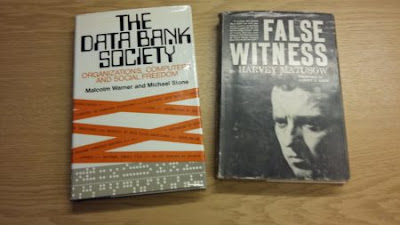 From the Harvey Matusow library at the University of Sussex. See blog post.

In Cosmic Trigger II, RAW writes about Harvey Matusow, and his Stringless Yo-Yo Company. I still haven't found the film RAW mentions, but doing a little research on Matusow's life was interesting. About the International Society for the Abolition of Data Processing Machines, Matusow wrote in the late 60's:

"The computer has a healthy and conservative function in mathematics and other sciences," but "when the uses involve business or government, and the individual is tyrannized, then we make our stand.

Here's the passage from Cosmic Trigger II:
• • •
A fellow named Harvey Matusow made his living for a few years identifying people as Communists he had known while in the Party. Then he suddenly confessed that he had never been in the Communist Party, at all, and had been making everything up out of his rich Slavic fantasy life. Everybody was furious at him — both the Left and the Right — and eventually he went to jail for perjury.

When he got out of prison, Harvey made a documentary film about his adventures, which I saw. A lot of it involved his testimony about the Stringless Yo-Yo Company, which he had claimed was run by the Communist Party. None of the Congressmen who heard this testimony asked him what the hell a stringless yo-yo was.

The film may still be available. It’s called The Stringless Yo-Yo and I heartily recommend it to anyone who wants to understand how politics works.

There's a lot online about this odd character. This is a tantalizing synopsis:

This is a bit of writing from Matusow that I found interesting:
http://www.ibiblio.org/mal/MO/matusow/chapters/ch1.html

Someone found a copy of The Stringless Yo Yo documentary:

Thanks to Jon Swabey for finding this.

This film is from 1998, so it either isn't the movie mentioned in Cosmic Trigger II or has been updated/revised from the original verstion.