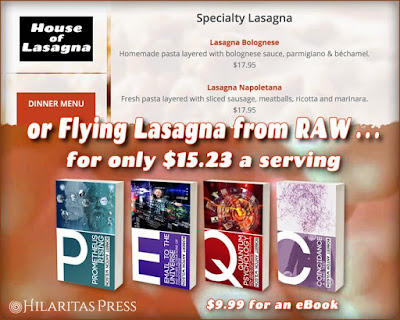 Hilaritas Press has not made a any book announcements lately, but as many as six books could be coming in in the near future, Rasa reports, so watch this space for news.

"AND, we have three top secret surprise books that are in various stages of production. One of them may pop into existence even before Ishtar Rising and The New Inquisition!" Rasa said.

"As for new books from Hilaritas Press, yes, we are ever so close to publishing two RAW titles – there are just a few details that have been hard to pin down. One issue was resurrecting Ishtar Rising. We figured out that New Falcon didn’t really take a lot of care in helping Bob turn Playboy’s The Book of the Breast into Ishtar Rising. We think that because they didn’t go to the trouble or expense of using the photos that Playboy used, photos that illustrated specific parts of the text, a lot of the original intent and form got lost. We decided to go to the trouble and expense of getting as many of the original photos as possible (or using better ones in many cases), and using the captions that Bob originally wrote. All the editing and proofreads for the book are finished, so getting the final photos together is the last task. Christina gets some kind of special award in RAW World for her heroic efforts in doing the research to find all the photos. I think at the moment we are still waiting to hear about the last photo we need. Just this past week Christina finalized the purchase of the photo that turned out to be the hardest to find. The Book of the Breast had a wonderful photo of Linda Lovelace that we found impossible to locate (we needed an original photo file and permission), but Christina managed to track down an equally great Lovelace photo from famed photographer Milton H. Greene. We’re both excited about this new edition because of the “photo effort,” but both of us are also very excited about the surprise guest writer who provided a new foreword for the book. It’s going to be a very cool Ishtar Rising, and the theme of the book, the rise of Ishtar, the struggle between the Matrist and the Patrist, could not be more apropos for the rather insane times within which our current lasagna flies.

"The other book that is very close to ready is The New Inquisition, another RAW title relevant to the times. I haven’t seen amoeba's new cover yet, but the book is edited and proofed. We are expecting the cover soon, but that release is going to be delayed a bit longer because just this week we got the tentative “yes” from a “celebrity” friend of RAW’s who both Christina and I thought would be ideal for writing a new introduction to The New Inquisition."

As you can see, Rasa is working hard to make the new editions worthwhile when they come out.
on December 17, 2019

Soooooo excited! New Inquisition and SDM! And mystery publiations?! What a tease!

So glad to see Natural Law or Don't Put a Rubber on Your Willy on the forthcoming titles list...

Near impossible to find Ishtar Rising any lower than £40 here in the UK. Thank you once again for your ongoing labour of love and for making RAW's rarer titles more easily available. It is as always much appreciated - Iain