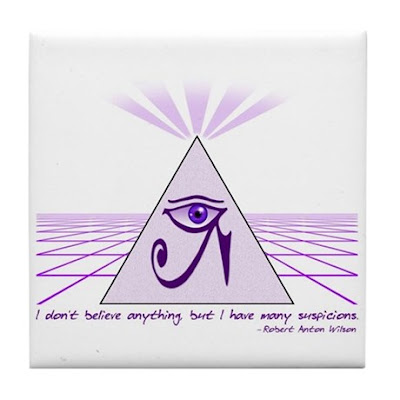 The Robert Anton Wilson Trust announces (on Twitter): "We just made some long awaited changes to the RAW CafePress shop. Avoid the fnords! Shop for genuine RAW lasagna." You can get tile coasters, coffee mugs, tote bags, t-shirts and other goods with quotations from RAW or other references to him.

I asked John Higgs if his latest full length tome, The Future Starts Here: Adventures in the Twenty-First Century, or his new William Blake book, William Blake Now: Why He Matters More Than Ever is about to become available in the U.S. The answer is, not yet. "There's still no US publisher interested in those books alas, so yes they are only available from the UK. Perhaps the 2020s is when I'll find an American publisher who gets me."

However, any of John's books published only in Britain can be ordered from outlets such as the Book Depository (free worldwide delivery) or from Amazon. I've asked my wife to give me a copy of The Future Starts Here, just as I used Christmas last year to take possession of Watling Street.

John replied, "No, I still haven't read The Widow's Son, I'm ashamed to say, although I'll get to it sooner rather than later as I loved The Earth Will Shake. I based my description of Leary's prison break primarily on his description of it from Confessions of a Hope Fiend (and a few other sources to correct the deliberate untruths included to protect those involved from the police). RAW would certainly have read the same book, and heard the tale from Tim, by the time he wrote Widow's Son, so the influence seems likely."