About the TV series announcement 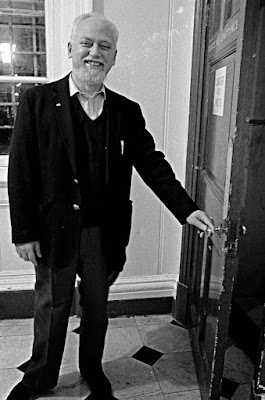 A couple of thoughts on Wednesday's big announcement about the planned Illuminatus! TV series. (As a rule, I do one posting a day here, but decided to do Thursday's announcement early, on Wednesday night to get the news out.)

1. The announcement is apparently the result of years of patient work; see this Tweet, from @amoebadesign, e.g Scott McPherson who does the Hilaritas Press covers, "We've had to keep this secret for 5 years, but stage one is now complete. Illuminatus! Trilogy TV."

I know little about Kallisti beyond what's in the press release referenced above, but see this previous post.  Good for Kallisti.

2. Can RAW fans claim a little credit for the announcement?

Robert Anton Wilson has been dead for more than 10 years. He never had a bestseller. He never figured out how to get on TV very often (one national TV appearance that I know of, pinch hitting fot Timothy Leary on the "Politically Incorrect" TV show). He never got much support from the literary establishment, i.e. book review publications, book sections of newspapers such as the "New York Times," attention from English professors, and so on.

What he HAS had going for him, even posthumously, was a grassroots network of fans and admirers keeping his name out there. It's a pretty good story, even if it's been ignored so far by the New York Times and National Public Radio, and perhaps that support was useful in getting the project off the ground.