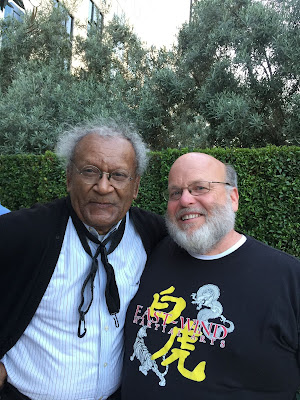 IMPORTANT UPDATE: Although Dec. 11 was the publication date for the new edition as of Tuesday, when this post was written, Eric has been informed by his publisher today that the new edition is still in production. The new version is definitely worth waiting for; I will let you know when it's available. -- The Management.

The new edition of Eric Wagner's An Insider's Guide to Robert Anton Wilson was released today. Eric says it is a revised third edition.

This is a major update of Eric's guide to RAW's work, with many changes and additions:

• Many updates and corrections in the text, including new entries for Beyond Chaos and Beyond and Robert Anton Wilson: Beyond Conspiracy Theory.

The link you provided seems to be for the 2004 edition.

@Van Scott, unfortunately I've had to walk back the post, through no fault of mine or Eric. The link seemed good Tuesday, and I fact checked every word with Eric, but we noticed the listing seemed to be the old book. Eric checked with New Falcon and learned the new edition was still in production.