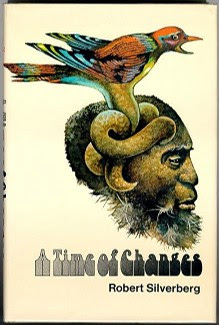 [A group I belong to, the Libertarian Futurist Society, has announced its finalists for the Prometheus Hall of Fame Award. A pretty strong list of nominees, in my opinion, and I'm pleased to see Robert Silverberg's 1971 classic, A Time of Changes, made the cut. Robert Silverberg is now 84 years old. Illuminatus! won the Hall of Fame Award in 1986. Here is the LFS press release. -- The Management]

The Libertarian Futurist Society has selected five finalists for the 2020 Prometheus Hall of Fame award.
This year's finalists are:

• "Sam Hall," a short story by Poul Anderson (first published 1953 in Astounding Science Fiction): A story set in a security-obsessed United States, where computerized record-keeping enables the creation of a panopticon society. The insertion of a false record into the system leads to unintended consequences. Anderson, the first sf author to be honored with a Special Prometheus Award for Lifetime Achievement, explores political implications of computer technology that now, decades later, are widely recognized.

• "As Easy as A.B.C.," by Rudyard Kipling (first published 1912 in London Magazine), the second of his "airship utopia" stories, envisions a twenty-first century world founded on free travel, the rule of law, and an inherited abhorrence of crowds. Officials of the Aerial Board of Control are summoned to the remote town of Chicago, which is convulsed by a small group's demands for revival of the nearly forgotten institution of democracy.

• "The Trees," a song by Rush (released 1978 on their album Hemispheres), presents a fable of envy, revolution, and coercive egalitarianism among the different kinds of trees that make up a forest.

• A Time of Changes, a novel by Robert Silverberg (first published 1971), the autobiography of a rebellious prince on a planet with a repressive human culture where the first-person singular is forbidden and words such as “I” are considered obscenities, composed in hiding while he awaits capture as leader of a revolution that threatens the State. He shares his story of dawning self-awareness, sparked by a new telepathy-inducing drug. This cautionary and romantic fable dramatizes the desire for freedom, individualism, self-determination and liberation from oppressive social norms and laws.

In addition to these nominees, the Hall of Fame Committee considered four other works: The Winter of the World, by Poul Anderson; The Handmaid's Tale, by Margaret Atwood; "The Pedestrian," by Ray Bradbury; and The Uplift War, by David Brin.

The Prometheus Award, sponsored by the Libertarian Futurist Society (LFS), was established and first presented in 1979, making it one of the most enduring awards after the Nebula and Hugo awards, and one of the oldest fan-based awards currently in sf. Presented annually since 1982 at the World Science Fiction Convention, the Prometheus Awards include gold coins and plaques for the winners for Best Novel, Best Classic Fiction (Hall of Fame), and occasional Special Awards.

The final vote will take place in mid-2020. All Libertarian Futurist Society members are eligible to vote. The award will be presented at a major science fiction convention.

For four decades, the Prometheus Awards have recognized outstanding works of science fiction and fantasy that dramatize the perennial conflict between Liberty and Power, favor private social cooperation over legalized coercion, expose abuses and excesses of obtrusive government, critique or satirize authoritarian ideas, or champion individual rights and freedoms as the mutually respectful foundation for peace, prosperity, progress, justice, tolerance, mutual respect, and civilization itself.

For more information or to nominate a classic work for next year, contact Hall of Fame judging committee chair William H. Stoddard (halloffame@lfs.org) at any time. Nominees may be in any narrative or dramatic form, including prose fiction, stage plays, film, television, other video, graphic novels, song lyrics, or epic or narrative verse, within the realm of science fiction and fantasy.

The Libertarian Futurist Society also presents the annual Prometheus Award for Best Novel and welcomes new members who are interested in science fiction and the future of freedom. More information is available at our website, www.lfs.org.
on December 27, 2019