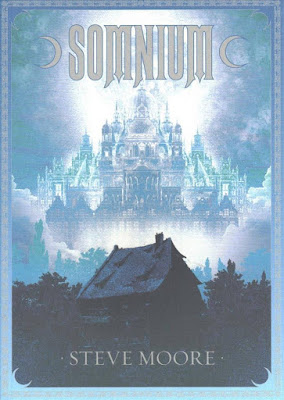 The late Steve Moore's fantasy novel Somnium came out in 2011, so of course Robert Anton Wilson never got a chance to read it. But I have noticed that many RAW fans, including me, are fans of the book. I read it a couple of months ago when I was on vacation, and I want to give it a few words here.

Somnium is narrated by a writer in the early 19th century in London who is enamored of the moon and of paganism. Part of the book is a narrative of the writer's present, including his relationships with various women, which in large part may exist only in his head, and parts are a narrative about another person, also enamored of the moon, who lives in Elizabethan times. There are also suggestions that the narrator was himself created by a writer in the future, evidently Steve Moore.

As the novel advances, it becomes harder to figure out what is actually happening and what is in the narrator's imagination. All of this makes it sound like the book is a difficult read, but it actually flows quite well and is a lot of fun.

There's quite a bit about Moore in John Higgs' book Watling Street. Somnium also  is a favorite of Gregory Arnott, who helped turn me on to it, and Alan Moore has an afterward in my edition of the book and calls it a "masterpiece." I listed the book in my recent ten best SF and fantasy books of the last decade list. I do have the feeling that despite the efforts of the book's fans, it has not attracted the attention that it should.

I read the book in a very handsome edition, pictured above, put out by Strange Attractor Press, a publisher with a website that's worth checking out.

Steve Moore, who died in 2014, was a prolific comics writer; Wikipedia has a nicely-done biography.
on December 02, 2019