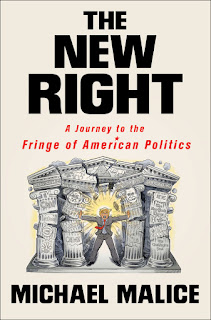 A few reading notes on books I finished recently:

Exit Strategy, Martha Wells. Fourth in the "Murderbot" series. Very good series of short science fiction novels -- everyone I know who has read them like them -- but start with the first in the series, All Systems Red.

The New Right: A Journey to the Fringe of American Politics, Michael Malice. A rather flawed book, but also very interesting and worth reading. I know now more about the "new right" than before, but the book also is about the progressive left, which Malice also criticizes. Many apropos observations, but in the end Malice makes the right wingers sound better and smarter than they actually are. (Are they really all polite and erudite?) Vox Day in particular comes off better than he deserves.

I read this after reading Tyler Cowen's review.

Grant, Ron Chernow. Very interesting, and I learned a lot about American history and even Ohio history in the course of learning about Grant. A bit wordy, but you'll find out why Grant's reputation is growing, and why Robert E. Lee's has been falling.

Fall, or Dodge in Hell, Neal Stephenson. This book is a sequel of sorts to Reamde, but it is a very different book, a more difficult read than most Stephenson books, a philosophical book more akin to Anathem than Reamde. Maybe Stephenson's most ambitious book. Rewarding, with an ending more satisfying than some Stephenson books.
on September 11, 2019