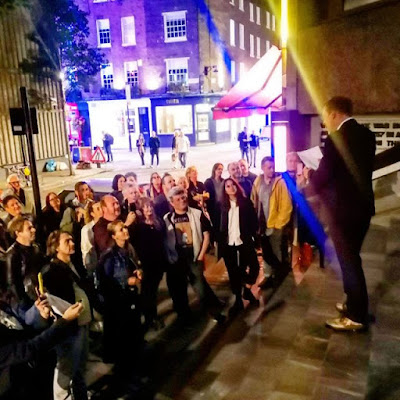 John Higgs' caption: "Many thanks to Richard Norris for the above photo, in which our gathering is blessed by a very Blakean thread of golden light."

John Higgs has released another email newsletter, with information about the big new William Blake exhibition at the Tate in London, and also about his new book on Blake, William Blake Now. (The exhibition will be there until Feb. 2 and the Tate says, "With over 300 original works, including his watercolours, paintings and prints, this is the largest show of Blake’s work for almost 20 years.")

John writes, "The Tate exhibition is an overwhelming experience which I urge you all to catch if geography allows. Keep an eye out for William Blake Now in the Tate gift shop - or indeed pick up the paperback, ebook or audiobook version online, if that pleases."

The book also is listed on the U.S. Amazon.   John's new book on the future also is listed.  In those two cases, Amazon is serving as a gateway for "Book Depository U.S." No Kindle versions in the states, apparently.

You can also read John's entire newsletter, which includes a discussion about British Exceptionalism, which unfortunately resembles American Exceptionalism.
on September 23, 2019

I was disappointed by his Blake book. Blake is a writer I’ve always been interested in but for whatever reason it’s an interest I’ve never pursued. I was genuinely excited about the prospect of learning more about him. The book contained some interesting anecdotes and musings about Brexit and British exceptionalism but when I finished the book I didn’t feel like I knew any more about Blake than I did going in. It wasn’t a bad book but I didn’t feel it had much to do with Blake.

Hi Van. Sorry you were disappointed. The aim of that little book wasn't to get to grips with Blake himself - that task will take a much larger work, which I'm currently working on. That book is called William Blake Vs The World, and it will be out in about 18 months. The aim of the little book was to put him in the context of the 21st Century and make a case for his increasing relevance. If you're wanting to understand him better now, I'd recommend Eternity's Sunrise by Leo Damrosch or Peter Ackroyd's biography Blake.

Hey Van, I believe that "William Blake Now" is a smaller book that precedes a longer, larger study of Blake...at least I remember reading that somewhere.

If I'm wrong, I might be, and if you're interested in reading about Blake the man I'd recommend the original biography "The Life of William Blake" by Alexander Gilchrist (which also has a volume of poems selected by Dante Gabriel Rossetti's brother) or the more recent "Blake" by Peter Ackroyd.

Alan Moore's "Angel Passage" is definitely worth snooping around for and is amazing. It's more of an overwhelming magical reflection on Blake but contains a lot of information. Anything by Kathleen Raine is good for context in mysticism but her magnum opus "Blake and Tradition" is prohibitively rare and expensive, I had to borrow it from a Professor who was well aware my "jokes" about simply not returning it when I graduate were at least semi-serious and made sure to get it back from me. Lol.

If Higgs *does* have a later, longer volume coming out it'll be worth reading, he seems to always hit the mark.

I have read "Stranger from Paradise" which is okay but dry as bones...at least that's how eighteen year old me perceived it.

Thanks guys for the feedback. I didn’t realize that a second book was in the works. Thanks for the perspective.