'Lenin was a mushroom' 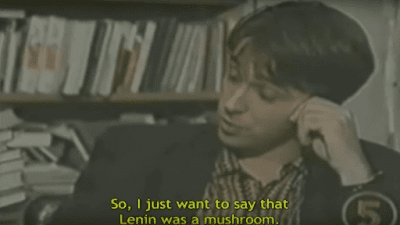 Looks like Discordianism may have been bigger in Russia than we thought.

In Reason magazine, Jesse Walker writes about a TV program broadcast in Russia that offered to "shed new light" on the October revolution. It explained that Lenin was a psychedelic mushroom and a radio wave.

"Needless to say, the show was a joke. But it was not identified as a joke, and Soviet TV shows were not known for joking about Lenin," Walker writes.
on September 21, 2019