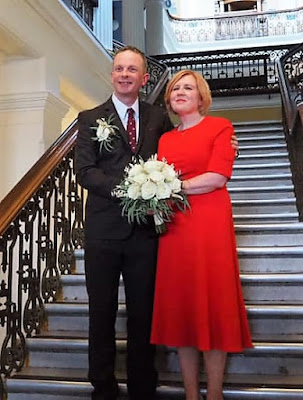 John Higgs goes on the Ezra Klein Show for an hour and a half, and the result is one of the better podcasts you will hear this year. It opens with a sound clip of John talking about reality tunnels, and that sets the tone for a meaty podcast -- John talks about Timothy Leary, Robert Anton Wilson, the cast for pragmatic optimism and other topics. Toward the end, when John is asked to recommend three books, one of them is Cosmic Trigger I. Available here and on the usual podcasting apps. Nice to hear RAW discussed outside of the usual places.

Fun fact: Ezra Klein is a prominent American political journalist (co-founder of Vox etc.) but he also is married to writer Annie Lowrey, who has been mentioned on this blog because last year she published a well-received book on the case for the UBI, Give People Money.

Higgs get hitched. Not to be outdone by Ezra Klein, John decided to get married, too, jumping hastily into matrimony on impulse after being together with Joanne for 26 years and spawning children. A photo of the occasion is reproduced above. Congratulations to one of my favorite British writers.

More Higgs news here, including the book tour to promote the new book about William Blake.
on September 04, 2019

Congratulations to Mr. Higgs on his nuptials and his Blake books, I have his essay coming in the mail and can't wait! I also need to touch up and send in my review of Selene.