How the Prometheus Award began 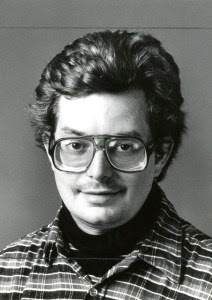 Michael Grossberg in the early 1980s, when he was founding the Libertarian Futurist Society. Photo courtesy Mr. Grossberg.

The Prometheus Award is the annual award given by the Libertarian Futurist Society for works of science fiction that are of interest to libertarian science fiction fans. The first award was given out in 1979 as a one-off; it was then institutionalized with the founding of the LFS, and it's been given every year since 1982. It's the only literary award given to Robert Shea and to Robert Anton Wilson, at least that I know of; they got a Prometheus Hall of Fame Award in 1986 for Illuminatus! (in a tie with Cyril Kornbluth's The Syndic. (You can read Shea's acceptance speech and Wilson's thank you letter.)

I have recently completed two long interviews for the Libertarian Futurist Society blog on the two founders of the awards: science fiction writer L. Neil Smith, who gave out the first award in 1979, and writer, critic and  journalist Michael Grossberg, who founded the Libertarian Futurist Society and has been active ever since in keeping the award going. The Smith interview posted June 22; the interview with Grossberg went up Friday. Together, I think the interviews provide a pretty good oral history of how the award began.

I'm active in the Libertarian Futurist Society and serve on the organization's board.