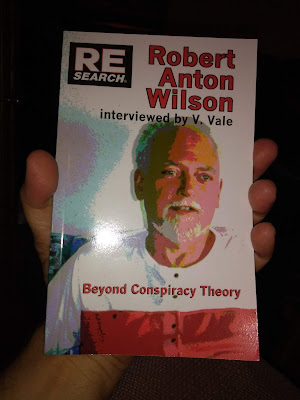 Robert Anton Wilson: Beyond Conspiracy Theory (ReSearch #18) edited by V. Vale, is a nice treat for the hardcore Robert Anton Wilson. It has a very good, long interview by V. Vale and includes other items, some of them arguably unique. It is well produced and edited. It's not an essential part of the RAW canon, and at 138 pages it's arguably less substantive that Beyond Chaos and Beyond, this year's other posthumous RAW book (466 pages), but it's so well designed it almost seems like an art book.

The bulk of the book is Vale's interview, and fortunately it's valuable. I want to be careful not to give anything away, which would be unfair to Vale,  but I also want to try to characterize it. There is a particularly good discussion about Aleister Crowley and magick. There is a good, long answer to a question about Wilson's "key books," good discussion of William Burroughs, discussion about what it's like interacting with fans and a nice anecdote about RAW meeting a famous American writer.

The book also includes Wilson's 172-question "International Conspiracy Trivia Quiz" (with Wilson's answer key), a list of 50 books from Wilson's library that Vale requested, a marketing document on the lectures that Wilson could offer, two letters from Wilson and an introduction by Andrew Bishop (quite well done.) Bishop is the person who found the forgotten interview.

The book is illustrated by Vale's photographs of Wilson, plus some irrelevant but artistic "street photography" by Yoshi Yubai.

The book had originally been planned as a special issue of RE/Search while Wilson was alive. It was never published and parts of it later were included in Wilson's Coincidance. The remaining material was rediscovered in 2016. There's an Editor's  Note that carefully explains all this, an example of the book's meticulous editing.

Robert Anton Wilson: Beyond Conspiracy Theory has a list price of $20; with fees, it cost me $25. "While supplies last" a small photo print of RAW signed by Vale is included, a nice bonus.

You can also read my Beyond Chaos and Beyond review. Since I published the review, a paperback edition has been issued, available for $20.

Probably coincidence, but both of the new books have "beyond" in the title.

See the RE/Search website (lots of arty and punk rock publications, with many on subjects of probable interest to most RAW fans.)

Email ThisBlogThis!Share to TwitterShare to FacebookShare to Pinterest
Labels: Beyond Chaos and Beyond, Robert Anton Wilson: Beyond Conspiracy Theory., V. Vale

I enjoyed the RE/search book on RAW, especially his discussion of some of Bob's Kinbote-like fans.