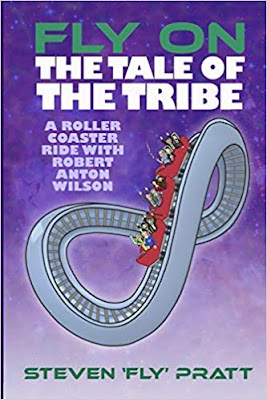 I was a latecomer to Maybe Logic Academy -- I was there for its final hurrah in a semester that saw one of the classes I enrolled in cancelled and another with only two active students and an absentee teacher. I can’t even remember how I found out about it -- something to do with how one can wander over the Internet while working a boring office job. Anyways, that was where I first heard about The Tale of the Tribe.

Later, after I had read more about the Tribe and had read TSOG where the most complete piece of information on the book was in print at the time, I was talking about it to my friend as we stood outside looking at the stars on a hot West Virginia night; Robert Anton Wilson was basically going to explain communication, the Internet, and what was going on. My friend laughed --  “finally!” he exclaimed. Robert Anton Wilson had been dead at least five years.

To say that Wilson’s unfinished Tale felt like a loss is an understatement. In one issue of Alan Moore’s Tom Strong the perfect man finds his heart’s desire as an illusion conjured up by a malignant alien intelligence; a copy of Joyce’s sequel to Finnegans Wake, Finn Wakes Agen. In Steven Moore’s Somnium the protagonist in the protagonist’s novel finds himself in a library of unwritten novels. There’s something sublime about an unpublished work or some valuable manuscript lost to time; it has been easy for me to remain tantalized by the lost promise of the Tribe.

This is all a rather lengthy way to say I was excited when I saw the release of Steven "Fly" Pratt’s Fly On The Tale of the Tribe. Pratt’s book is slim but dense with information -- it’s playful and thought provoking. Fly deals with the Current Situation and how Wilson’s ideas have endured into our young century; appropriately for one of the torchbearers of model agnosticism, the book is full of promise and puzzles. Like Higgs at the end of Stranger Than We Can Imagine, Pratt seems to bank on agnosticism as a solution to the increasingly chaotic information climate: but that’s beside the point as I believe Pratt is more interested in inspiration than pontification.

Much of the book is invitational -- Pratt repeats throughout that it is critical to create one’s own “tale of the tribe.” One excellent example is given earlier in the book when Pratt points out that his and RAW’s cast of characters are all male -- Pratt gives an example of a female “tribe” beginning with Ada Lovelace. Later in the book Fly lays out the schemes for two later tale of the tribe courses that could be reconstructed by the intrepid student. Pratt also gives a healthily circumspect view of Ezra Pound and his complicated life; at one point Pratt seems to decide upon using Ernest Fenollosa as the primary touchstone for Pound’s contribution to the tale of the tribe, ideogrammic language,  as a deft sidestep when the fascist taint becomes too much with Pound. Of course Pratt makes sure to mention that Pound’s antisemitism was a phase that the poet regretted in later life. Everyone’s happy.

The most interesting ideas, for this reader, were the discussions of the hologrammic prose exemplified by Finnegans Wake and, this part really hooked me, Alan Moore’s Jerusalem. Fly is one of the few commentators I’ve seen who have given Moore his due: Jerusalem is a monumental masterpiece that will rank high among our race’s literary achievements if Providence is kind enough to ensure some sort of posterity. Fly is able to explicate how breathtaking the scope of the work is, as it encompasses art, magic, and the facets of our reality, and we seem to have similar tastes, go figure, since we both consider the chapter “Round the Bend” as the crowning achievement of the novel. (He even shares my love of Moore’s The Black Dossier!) In many ways “Round the Bend” serves as a magnificent realization of Tom Strong’s lost novel -- it is a sequel or a continuation of Finnegans Wake. The whole of Jerusalem could be seen as something similar or as an essential commentary on Joyce’s goals but that would belie the empirical majesty of Moore’s work.

While talking about the epic Cosmic Trigger play produced and directed by Daisy Eris Campbell Fly waxes rhapsodical: "Co-create a Universe, a theatre of the mind where each and everyone of us can work on many levels of synchrony, consider set and setting, speech and place. Make the invisible visible." Marching orders to make one's head turn.

Pratt’s little book will give the reader a lot to think about and chew on -- it is a text that is meant to send you into the hinterlands of language to find the foundations of our reality. I’ve brushed over a lot of Fly’s work in the book, partly for the sake of length and partly because I am still figuring out my thoughts and plans for the ideas he brings to the table. Suffice to say that this is an indispensable piece of scholarship for the RAW fan and an all around Important Book. RAW’s original book may have not been able to come to life but Fly proves that the tale of the tribe is still being told and is ready to be explored at any moment. Personally, I’m just grateful Fly made sure to include Moore in RAW’s canon. The book's cover art is by, the Tenniel to RAW's Carroll, Bobby Campbell whose illustrations implicitly make a connection between Fly and the green-skinned Mescalito. Pay attention.

As a postscript to the Maybe Logic story -- it was through Maybe Logic that I found Tom’s blog so even when the initial attraction is in bits and pieces it can lead to something satisfying. The tale of the tribe isn’t over until the last monkey stops squawking.
on May 16, 2019