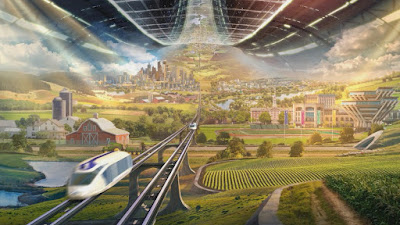 "If the sci-fi space cities of Bezos’s Blue Origin look familiar, it’s because they’re derived from the work of his college professor, the late physicist Gerard O’Neill."

Of course, O'Neill also influenced Robert Anton Wilson's thoughts on space colonies. I don't like the sneering tone of the article, but I suppose that's probably the price for getting such an article in print at many publications. There are people who do things, and people who are ready to explain why everything is a bad idea, and in 2019 it's the latter who dominate. (The author is a architecture professor, and he objects to the design, although he apparently has other gripes, too.) Hat tip, Jesse Walker for pointing to this on Twitter.