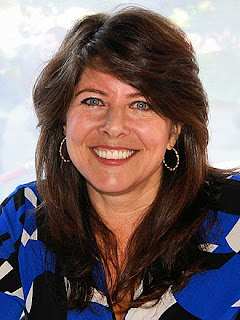 I've recorded some of the synchronicities that I've run into on this blog; here's another one. I don't really know what they mean.

I noticed the other day on Twitter that some of the folks I followed were posting about a mistake made by author Naomi Wolf that was revealed when she was being interviewed live on BBC radio. I recognized her name, but I've never read any of her books. It's not really germane to this blog post, but it seems to me how people reacted was a pretty good empathy test.

Anyway, I was struck that I got an email Thursday, reminding me that Dr. Naomi Wolf was waiting for my response to connect to her on Linked In. I know of no connection whatsoever between me and Dr. Wolf and can't imagine why she would even know who I was but I dutifully accepted and connected with her.

Thursday night, my wife and I went to a Cuyahoga County Public Library event featuring two novelists: Thrity Umrigar interviewing Celeste Ng. (I can recommend them both: Umrigar's The Story Hour is a really good novel, and so is Ng's Little Fires Everywhere.)

During the dialogue, Ng brought up the incident without mentioning Wolf's name, describing it briefly.

So why do I keep running into Naomi Wolf? Is Universe trying to tell me I should read one of her books?

In Pause, Play -- A Higher Consciousness Handbook, the Kindle ebook by Klaas Pieter van der Tempel that Gary Acord and I published (only $2.99! A steal!), the author argues that synchronicities should awaken us:

Whether the synchronicities are boring or amazing, interpret them as if they are meant to be meaningful. Objectively speaking, you cannot know what they mean, not should you need to. You can only decide it for yourself. Know that, as with dreams, the main message of any synchronicity is this: Wake up!
on May 31, 2019

I would hazard a guess that it’s more about the empathy test then Naomi Klein. The message rather than the messenger.

Some of the people on Twitter were pretty harsh on Naomi Wolf (not Klein.)