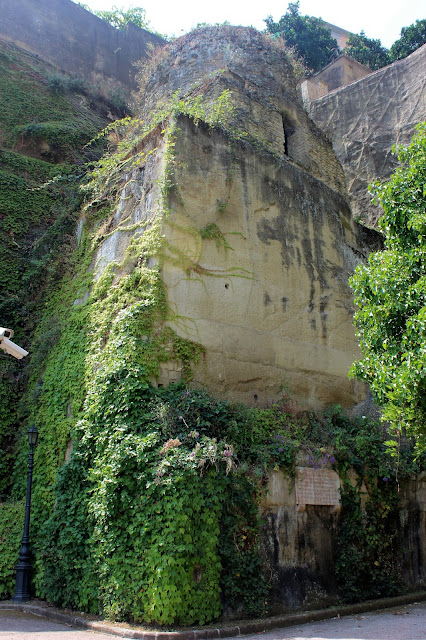 The tomb of Virgil in Naples, mentioned in this section of the novel. Creative Commons photo by Miguel Hermoso Cuesta.

This week, please read from page 43, "It was only a day later that 'Mr. Drake' contacted Sigismundo" to page 68. "Uncle Pietro guessed his thoughts. 'It is always that way in conquered nations,' he said sadly." As I am giving passages as well as page numbers, readers can purchase the Hilaritas ebook and use that, if they wish.

In a comment for Week One, Eric Wagner wrote, "This novel has seven sections, each with the name of a tarot trump. One could model these chapters as corresponding with the seven chakras, the seven days of the week, the first seven circuits, etc."

This section is named "The Fool," and it is in this section that Sigismundo realizes he is a fool and learns the Cosmic Schmuck principle.

After Sigismundo learns that he is a fool, Uncle Pietro lectures Sigismundo on the first three circuits in the Eight Circuit Model of Consciousness: "Actually, there are potentially at least eight souls" (page 66).

Many of the characters in this novel are the ancestors of characters in the Illuminatus! trilogy -- Sigismundo Celine and Hagbard Celine, Mr. Drake and Francis Drake, and so on. Neal Stephenson did something very similar later with Cryptonomicon and the Baroque Cycle. Probably just coincidence, although there is no way to know as Mr. Stephenson makes himself essentially unavailable to questions from fans, journalists and other such nuisances.

Eric also remarked in the first week, "Everything in these first couple of pages seems in-between. The book starts with the protagonist,Sigismundo Celine, half asleep, in-between a dream and awake to his environment. The priest appears in-between changing the material of a wafer of bread into the spiritual body of Christ. When the Uncle gets assassinated, for those few moments until it finishes, he goes between life and death. In-betweenness seems an important concept, to me."

Sigismundo is a teenager, in between being a child and an adult, and is therefore working particularly hard to emerge from Dante's dark wood and figure things out, with Uncle Pietro serving as Sigismundo's Virgil.

Tom, great job on the study group posts! For those interested in the Tempio Malatesta which shows up later in the book, I highly recommend "Stones of Rimini" by Adrian Stokes.

Pg. 65. The reference to the FRC along with other details make me think Frances Yates's books had an influence on this novel.

I'm sorry I'm late to the group. This section is MEATY. I had forgotten just how much information RAW was able to finagle into every page of this novel until I started to reread it this morning.

During the section at hand I laughed out loud (""You just bleeding said entelechy," he howled.") and felt that the Orfali scene was perhaps the loveliest dramatic rendition/guided meditation of the Lesser Ritual of the Pentagram than I've encountered elsewhere. I deeply appreciate and needed a dose of the way Wilson demonstrates and begs for compassion on every page of the book so far. I appreciate I had this, and Masonry- however paleolithic and watered down it is now, as frameworks when I was going through a transitional moment in my life when I first read it.

Rereading this today does convince me that the closest thing that I can think of to the "Terra Ignota" series, in tone and content, is RAW's Historical Illuminatus Chronicles- the specific cultural forces that appear, the perspective of sincere, confused skepticism, and the language-play in both works is striking.

I also appreciate the advice that Uncle Pietro gives Sigisdmundo at the end of this week's section- don't muddle your mind with too much esoteric knowledge at once, take time for digestion, and don't talk about it overmuch.

I love the picture of Virgil's tomb. Saved me a Google search, haha. I looked up cioppino and according to the webs (i.e. Wikipedia- I'm not going to dig any deeper because I'm lazy.) the dish cioppino is a fish stew that originated in San Francisco so a waiter in 18th century Naples would have to explain what cioppino is as well as a mouse has made its way into the dish, right?

One of the things about the eight circuit model that’s always appealed to me is that it seems to provide an accurate representation of human behavior. On page 67 Uncle Pietro says, “reason very seldom overrules these older parts of the mind.” Anyone who wonders why autocratic demagogues rise to power so often should think about this. This passage reminded me of a line from my favorite Melville poem:

‘Tis dream to think that reason can
Govern this reasoning creature man.

Orfali is no doubt named after the Berkeley publisher and co-founder of And/Or Press, Sebastian Orfali, who was friends with RAW and they partied together. Orfali spent much of his life with Bev Potter, who's republished most of Leary's books in the past decade or so, as broken-up versions of the originals.

p.40 is where dialectics is mentioned: "Like all Jesuits, he could argue the case against any Church dogma as well as the case for it; that was because of their training in dialectics." RAW seems to use or imply the dialectic method a few times in what we've read so far. For instance, two pages later, "The Book of the Law" reference and quote commented upon last week gets inserted in a paragraph about manipulation and mind control (also commented upon last week). "The Book of the Law" advocates freedom and liberty so we get an implied dialectic of freedom vs fascism. Page 53 - 55 sees Sigismundo going through an inner dialectic concerning Faith and Doubt.

I like the comments about in betweeness promoted in this week's post. I didn't realize the obvious one - that Sigismundo is between a child and adult. The dialectic method seems connected with this concept of the in between; I can't quite articulate how at the moment.

Pietro does appear as a guide to SC. "A guide" seems a theme in this early part of the book. SC's father and brother are named Guido. In the deconstructed Banishing Ritual that RAW turns into a trance induction (p.61 - 63), the last image invoked = "The Spirit of Guidance."

The induction begins near the bottom of p. 61 with the Qabalistic cross as given by the Golden Dawn.

The week's introduction of an FRC initiate in Dr. Orfali reminds me of a good book called The Rosicrucians by Christopher McIntosh. I consider Dr. Israel Regardie as someone that tried to embody Rosicrucian ideals in modern times.