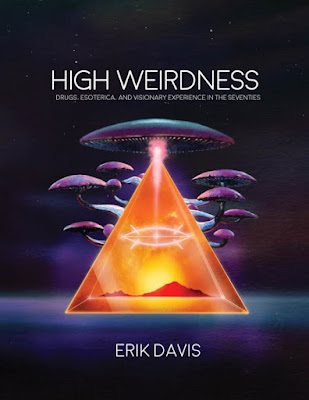 A little more information has come out on High Weirdness, the new Erik Davis book that is "An exploration of the emergence of a new psychedelic spirituality in the work of Philip K. Dick, Terence McKenna, and Robert Anton Wilson."

Above, you can see the cover. Also, the release date, at least in the U.S., is July 23. That's Robert Anton Wilson Day.

Here again is the book description:

A study of the spiritual provocations to be found in the work of Philip K. Dick, Terence McKenna, and Robert Anton Wilson, High Weirdness charts the emergence of a new psychedelic spirituality that arose from the American counterculture of the 1970s. These three authors changed the way millions of readers thought, dreamed, and experienced reality―but how did their writings reflect, as well as shape, the seismic cultural shifts taking place in America?

In High Weirdness, Erik Davis―America's leading scholar of high strangeness―examines the published and unpublished writings of these vital, iconoclastic thinkers, as well as their own life-changing mystical experiences. Davis explores the complex lattice of the strange that flowed through America's West Coast at a time of radical technological, political, and social upheaval to present a new theory of the weird as a viable mode for a renewed engagement with reality.
on March 08, 2019

Thanks for the update Tom on Erik Davis's book. I like the title (could not be more appropriate for the times we live in). First time I heard Erik speak in person was in Santa Cruz during RAW Day event on 23 July 2017 and as I was admiring  Erik's meandering through his mind, I thought to myself: 'This guy really gets it'. Later we engaged in a short discussion and again I admired his ability to speak with high level of clarity about complex issues. I look forward to High Weirdness.

I wonder how much of this he'll leave out of the book?

Having labored on the revision of High Weirdness for at least as long as the dissertation took, I'd of course like to believe that my effort was worth it in a better book that is worth the wait.

In terms of RAW I added material more than I removed it, and more importantly, smoothed the ideas and improved the lingo that carries them forward. The dissertation was like a sloppily wordy first draft with lots of secondary material crammed in, and without the cherry on the top of yummy prose.